After working with Saint Anselm College in Manchester, New Hampshire, VP of Business Development and Client Relationships Preston Hunter and the rest of the team at Eckman Construction in Bedford, New Hampshire were once again excited to further strengthen the partnership that they had built in the past.

“They’re a long-term, repeat client for us,” said Hunter. “This is actually the fourteenth project we’ve completed for them.”

Over decades of working together, Eckman Construction has built residence halls, academic buildings, athletic facilities, and renovated the Joseph Hall, the former convent, for faculty office and seminar rooms. Most recently, the construction company also built an addition to the Carr Recreation Center, a two-story fitness facility designed to serve the entire student population. The Spagnuolo Fitness Center is named after former Eckman president, Tony Spagnuolo.

This isn’t the only college that the company works with either. In 2010, Eckman built Keene State College’s Alumni Center. The 20,200- square-foot Alumni Center was built on Main Street and attached to a historic neighboring structure which was completely renovated, acting now as the bridge between the downtown center and the college campus.

Their latest project, a new residence hall on campus, is viewed by some as a “signature building,” according to Hunter, a goal that both parties have always hoped to accomplish. The 47,000-square-foot hall that can house 150 students in a variety of single, double and triple rooms was modeled to look like the other buildings on campus. Hunter says they borrowed some elements from other buildings on campus and used the same bricks as others, a choice that made the new hall instantly fit in with existing campus buildings.

One of the goals of the design was to bridge the monastic architectural elements found in the existing campus buildings with the more contemporary state of the art impression that reflects the 21st century student experience.

This is not the first time they’ve gone in with this focus, however. Each project is given this attention to detail, as shown by the work done on the Carr Center.

“The Spagnuolo Fitness Center has a curved exterior, lots of glass, but again was blended to look as if it was already there,” said Hunter.

The new hall not only has beautiful spaces, but it aims to improve the student experience by creating opportunities for academics within the residential setting. This facility, which is being called the Living Learning Commons, includes classrooms, conference rooms, lecture spaces, study rooms, and other gathering areas.With key swipes and gender specific living spaces, the openness is balanced with the security needed to give students peace of mind.

“Each hall is its own neighborhood,” said Hunter. ”Ninety percent of students live on campus, so this really supports their desire to have students living and learning in the same space.”

The project was completed in late July, giving the college time to move in the furniture and other fixtures. Though classes are only a handful of weeks in, students are filling the rooms, some having moved in a few weeks early due to the sports team pre-season schedule.

“So far, the reviews are very positive,” said Hunter.

Along with this traditional style hall, the company also has experience in building suite style living space, in which three or four rooms surround a common living area.

Though proud of Eckman’s hard work on this project, Hunter says much of the success is due to both JSN Associates and Lavallee Brensinger Architects, who did the structural design and architecture work, and the subcontractors who “are the people truly delivering the project.”

In the end, the experience left Hunter feeling positive about the work his team accomplished and excited to keep the relationship going.

“The partnership is strong and the benefit there is two ways,” Hunter said. “The college has the confidence to know we will complete the project on time and under budget. For us, we will be working with a client that is responsive and receptive to our ideas, who is a positive member of the project team. We can’t say enough about  Saint Anselm College. They are one of our favorite clients to work for.” 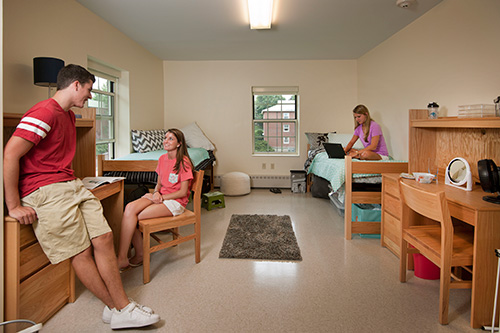 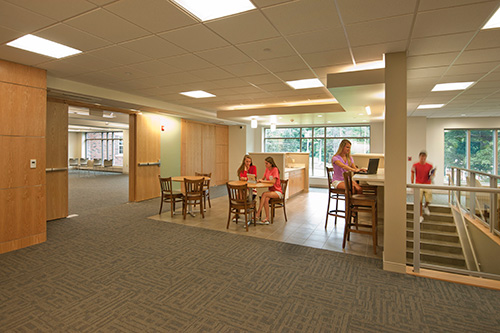