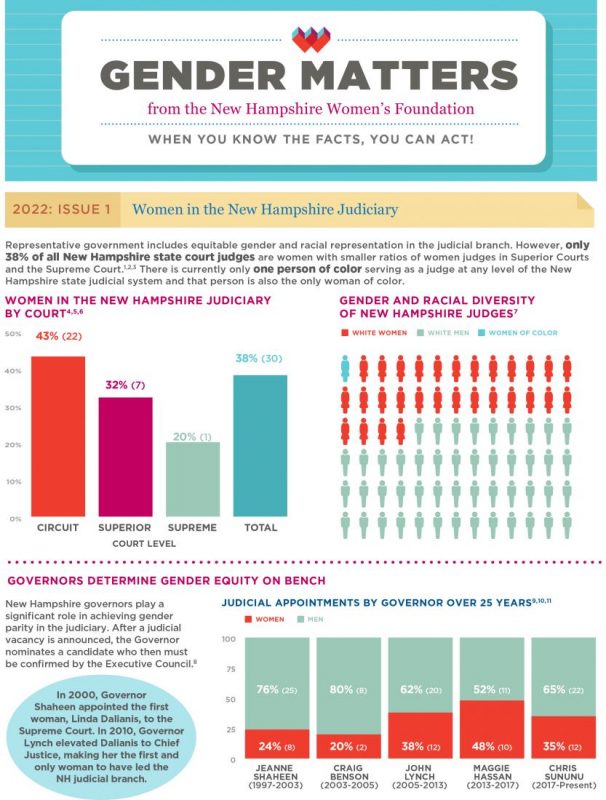 A new Gender Matters report from the NH Women’s Foundation has found that only 38 percent of all state court judges are women, with even smaller ratios of women judges in the state’s Superior Courts and Supreme Court.

In addition, the report found, only one person of color is serving as a judge at any level of the New Hampshire judicial system, and that person is also the only woman of color. In New England, New Hampshire is tied with Rhode Island for the lowest percent of women on the state Supreme Court (20 percent, or one of five justices).

“Representation matters in all branches of government,” said Tanna Clews, CEO of the Women’s Foundation. “As we celebrate the long-overdue milestone of the first Black woman nominated to the US Supreme Court, Judge Ketanji Brown Jackson, we see many opportunities in New Hampshire to increase gender and racial diversity among New Hampshire judges.”

The report also looks at the impact of the Judicial Selection Committee, New Hampshire women of historic significance in the judiciary, and the efforts of the New Hampshire Women’s Bar Association’s “Path to the Bench” sessions.

As part of the report, the Women’s Foundation has made several policy recommendations to increase gender and racial diversity in the New Hampshire judiciary: