In copious texts to Trump’s chief of staff, Maria Ryan exhorted him to take action 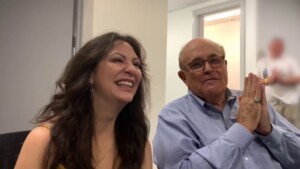 Maria Ryan, the former president and CEO of Cottage Hospital in Woodsville who met Rudy Giuliani when he visited the hospital in 2018 and has long been reported as his girlfriend, stood by her man as he has sought to overturn the result of the 2020 election and perpetuate the presidency of Donald Trump.

Talking Points Memo reported that the trove of texts disclosed by White House Chief of Staff Mark Meadows indicate that Ryan “peppered” him with advice as well as offered evidence of foreign interference and election fraud in the weeks before the election was certified on Jan. 6.

In December, Ryan urged Meadows to appoint Ken Cuccinelli, then Deputy Secretary of Homeland Security — not attorney Sidney Powell — “special counsel for election security,” according to the report.

Ryan also suggested that John Ratcliffe, the director of national intelligence, declare there was “foreign interference” in the election, which would grant Trump .discretion to impose sanctions by executive order. She noted that while the media attributed the interference to Russia “my sources say it is just as likely China,” it reported.

On Jan. 4, as Trump prepared for a rally in Georgia, Ryan texted Meadows to say she had spoken with Trump who “asked for some talking points for tonight.” She forwarded him a 1,429-word memorandum, which she copied to Meadows, which TPM described as an “epic magnum opus” that “touched on every page in the election conspiracy playbook.”

In particular, Ryan highlighted a video of election workers in Georgia, likening it to the “Zaprota” film — a garbled reference to the Zapruder film of the Kennedy assassination –which she said documented the theft of 130,000 votes. Without any evidence, she claimed 10,000 votes were cast by deceased voters and another 66,000 by underage voters dead people and closed with an incoherent string of random numbers.

There is no indication that Meadows replied to Ryan’s messages, including one on Jan. 8 that sought payment for Mr. Giuliani’s legal services.

Ryan graduated from Manchester’s Trinity High School, earned a nursing degree at NH Technical Institute in 1989, a bachelor’s degree from the University of New Hampshire in 1994 a master’s degree from Rivier College in Nashua. She also and a doctoral degree from Warren National University, a defunct online university that was shuttered in 2009 and was widely described as a “diploma mill.” She served as CEO of Cottage Hospital from 2010 to 2020 and in 2017 was named an Outstanding Woman in Business by NH Business Review.