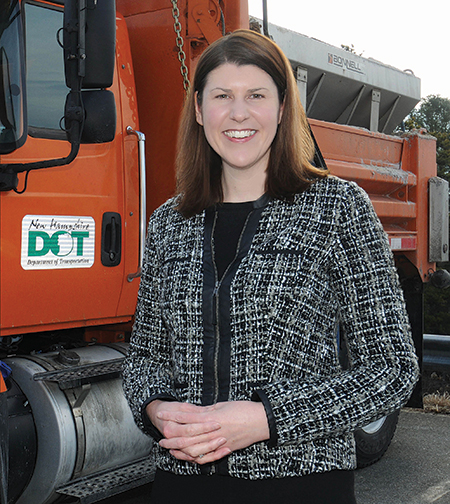 ‘Our economy relies on our transportation system,’ says Victoria Sheehan, commissioner of the New Hampshire Department of Transportation. (Photo by Jodie Andruskevich)

A native of Northern Ireland with a master’s degree in structural engineering and architecture from the University of Edinburgh in Scotland, Victoria Sheehan held a number of key positions with the Massachusetts Department of Transportation before her appointment as head of the New Hampshire DOT. As head of NHDOT, Sheehan, who assumed the post in October 2015, oversees a $650 million state agency with some 1,600 employees.

Q. What drew you to a career in transportation?

Q. To what extent is the state’s Highway Fund meeting the revenues needed for highway maintenance and improvements?

A. There have been a series of short-term fixes over the years to ensure that our state Highway Fund has sufficient capacity to meet the needs of both the Department of Transportation and the Department of Safety. Over time, since people drive more fuel-efficient vehicles, we’ve seen a decline in highway revenues, while seeing an increase in vehicle miles travelled.  With more individuals using our system, we have more congestion at intersections and more widening projects people would like us to advance, as well as wear and tear on the system.

Q. How are the state’s bridges holding up? How many are currently on the Red List?

A. The department has been able to procure additional federal funding as well as state general revenue funds, and we’ve also been prioritizing bridge preservation to keep bridges in good condition. There has been a decline in the number of Red List bridges because of those additional investments. There are currently 129 state Red List bridges.

Q. What does the Red List designation mean? Should people fear for their safety when crossing them?

A. No, Red List bridges are safe. We inspect them every six months to monitor the conditions, unlike regular structures which we inspect every two years. The Red List means the bridge is reaching the end of life and needs to be either rehabilitated or replaced in the near future. But in the long term, we’re looking at an increase in the number of Red List bridges in the state because of the number of bridges we have and the amount of traffic they receive.

Q. What are you looking for in the 2021-30 10-year Transportation Improvement Plan?

A. We have begun working with regional planning commissions and the Governor’s Advisory Committee on Intermodal Transportation and we’ll be working with the Executive Council and providing them with information for their version of the 10-year plan. One of the challenges we face in updating the plan is the uncertainty around federal and state funding.

Q. The federal Fixing America’s Surface Transportation Act authorized $305 billion for five years, including $183 million for New Hampshire. It expires at the end of fiscal year 2020. What are you hoping for in the next five-year program?

A. To fund the FAST Act, funds were transferred from the general fund into the (federal) Highway Trust Fund as the highway receipts were inadequate. The debate occurring in Washington, even as we speak, is whether to continue to transfer general funds to the highway fund, or increase the gas tax, or implement a new user fee based on miles travelled, or another alternative to the gas tax.

Q. How would the vehicles miles traveled tax, or user fee, be implemented?

A. Some say simply by using the inspection process to monitor the VMT, or by requiring devices in vehicles to monitor miles traveled. Across the nation, various states have been piloting various solutions.

Q. What happened on the Energy Infrastructure Corridor statute that didn’t become law because the Updated and Revised Utility Accommodation Manual did not get to the Secretary of State by the July 1, 2017 deadline?

A. The department is still working to resolve this issue. We had received conditional approval from the Federal Highway Administration by the date required. However, the Revised Utility Accommodation Manual was not finalized until after that date. We did not receive the final federal approval until after the final date.