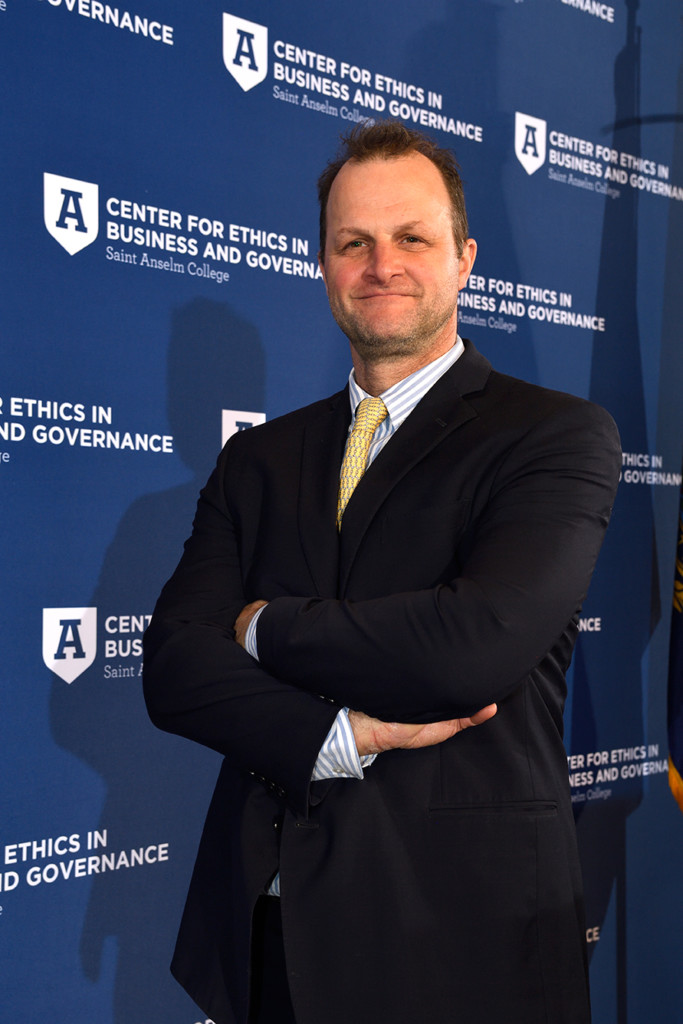 ‘The most significant initiative right now’ at St. Anselm College’s Center for Ethics in Business and Governance ‘is in solving the shortage of affordable housing,’ says Max Latona, the center’s executive director.

Dr. Max Latona is a professor of philosophy at Saint Anselm College and executive director and co-founder of the Center for Ethics in Business and Governance, based at the college. He is also founder of the Inti Academy, a nonprofit for refugee and immigrant children in Manchester that was recently taken over by Southern New Hampshire University and the Manchester YWCA.

A native of Buffalo, he joined the Saint Anselm faculty in 2001. He lives in Manchester with his wife Rosie, owner of White Swan Yoga in Manchester.

The Center for Ethics in Business and Governance — you want not only businesses to be ethical, but government, too? That’s quite a challenge, isn’t it?

Well, we want government, municipalities and so forth, to be ethical, of course, but governance applies to board governance, corporate governance, which needs a lot of ethics. Our mission, broadly speaking, is to address important ethical issues in our communities through research, education, dialogue and collaboration.

When did this organization start?

About 21/2 years ago. The whole college community came together with leaders in southern New Hampshire, in our communities and in private profit and nonprofit organizations. We have programs at the college and in the communities.

How do you see this as a logical extension of the educational mission of Saint Anselm College?

It’s the liberal arts Catholic identity in higher education and the Catholic approach to being open to all kinds of truth.

How do you promote ethics, and of what kind?

We have three kinds of academic programs, both on and off campus, about important and difficult ethical issues. The most significant initiative we have right now is in solving the shortage of affordable housing.

What we’re able to provide is a neutral institution where community members and stakeholders can come in and work on collaborative solutions. We feel like it’s a deeply ethical issue, because it’s a shortage that impacts people of every shape and kind — young people trying to get started, elderly aging in place, businesses suffering a growing shortage of labor, the growing homeless population; all are at least in some sense tied to the lack of affordable housing.

I take it those highly restrictive zoning regulations are found mainly in the rural areas and in the upscale suburbs, correct?

Usually not so much in the urban centers, but in the smaller communities that want to preserve the character [of their towns] and avoid congestion and burdens on their school systems and utilities.
But somebody has to loosen up and say, “Yes, in my backyard,” or we’re in trouble.

But some communities say we’re getting too many people coming here and taking advantage of municipal services. What do you say to them?

It’s a hugely controversial issue, and what we try to do is not to be advocates, but to get both sides together to work things out so that communities will be accepting of solutions that will result in more affordable housing and a better process for appealing to the zoning boards.

It doesn’t have to be a big six-story building or housing with 100 units. There are other possible solutions. One might be accessory dwelling units, attached or sometimes detached from single family housing — like having an apartment for in-laws. And less restrictive requirements for lot sizes in some towns would make homes more affordable.

What about the other major initiatives?

Our second major initiative is the Ethics Circle Initiative in high schools, locally and across the state. Students reflect on and discuss ethical issues in school or in the community. At Manchester Central, 50% of the student population is economically disadvantaged. We bring community leaders into these ethical circles, and they present real challenges and give students a real opportunity to grapple with problems and come up with solutions — real-world solutions. We had (former Manchester mayor and Catholic Medical Center president) Syl Dupuis present the question, “Should parents be allowed to forbid medical treatment for their children?” For religious reasons and so forth.

And then we have the Ethics in Our World program, both on- and off-campus. Faculty members present ethical challenges to the audience for students or the community at the To Share brew pub in Manchester and we’ve done a few of these on campus.

For example, whether you should give money to panhandlers, whether it is wrong to eat meat and what does progress mean? We’re developing a Building a Better New Hampshire series that will bring in community leaders and decision-makers for roundtable panel discussions of important ideas that will inspire our communities to positive change.

When we brought in Howard Brodsky of CCA Global Partners, Roberta MacDonald of Cabot Creamery and Tara Reardon of the New Hampshire Community Loan Fund, they presented three cooperative business models as alternatives to conventional business and nonprofit models and gave everyone a sense of the breadth of the cooperative movement. It’s incredible how many different types of co-ops there are and how effective they are in engaging customers, employees and community members.

So it’s not about ethics in terms of cheating or allowing faulty products to go out into the market?

It’s not about embezzlement or cutting corners. It’s not a bunch of professors telling people what they should do. Even if we do nothing else, it’s a demonstration of civil conflict resolution and that’s one of the most ethical things we can do.