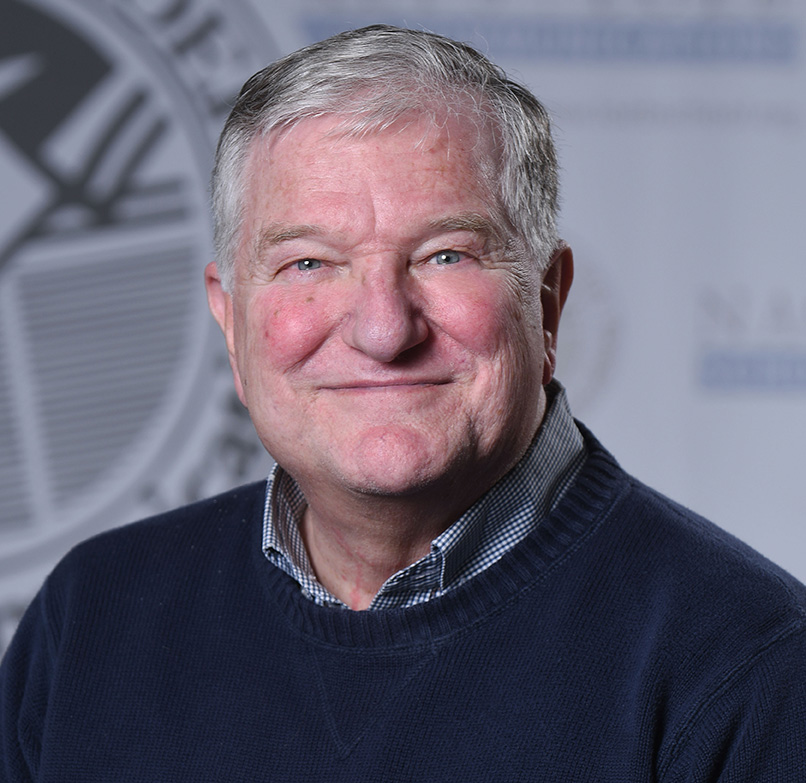 ‘It’s more important to be impartial and fair in journalism now, in the face of the opinion programs that have taken over cable TV and radio,’ says David Tirrell-Wysocki, a former longtime journalist and recently retired executive director of the Nackey S. Loeb School of Communications in Manchester. (Photo by Jodie Andruskevich)

David Tirrell-Wysocki wasted no time getting started in what would be a lifelong career in journalism. While majoring in broadcasting and film at Boston University, he worked as stringer for The New York Times and the Worcester Evening Gazette and as a news writer and talk show producer at Boston radio station WEEI. Moving to New Hampshire, the Newport, R.I., native worked for radio stations WKNE in Keene and WKXL in Concord before beginning a 33-year career as a reporter for the Associated Press in Concord. For the past 13 years, Tirrell-Wysocki has been executive director of the Nackey S. Loeb School of Communications in Manchester. He retired from the job on Dec. 31.

Q. When did you first think you would make journalism your career choice?

A. In high school. When I became an Eagle Scout in 1967, we had a chance to pick a profession and shadow someone in that profession for a day. I picked TV and radio broadcasting, and they paired me with news director Lou Corbin at radio station WFBR in Baltimore. That day I decided that what I wanted to do was be a news reporter. It was kind of exciting and it’s the kind of excitement I’ve felt in my whole career.

Q. Is the Loeb School meant to be a supplement to, or a substitute for, journalism school for aspiring reporters?

A. No, it’s not at all intended to be a substitute for someone going to journalism school. We have instructors who are working reporters and working photographers, lawyers and social media experts. They teach by example, from experience. Whether a student is in high school or is an adult who wants to learn more about journalism, photography, social media or the First Amendment, the purpose is to learn something today that they can use tomorrow. I think that’s why many come back to take multiple classes.

Q. Is the fair and impartial standard as important today as it was once considered to be, given the increasing role of advocacy journalism and the growing influence of cable TV channels and radio talk shows that are champions of one party or one ideology over others?

A. It’s more important to be impartial and fair in journalism now, in the face of the opinion programs that have taken over cable TV and radio. The journalist’s job is to present the facts so the reader or viewer or listener can decide which way to go on a story if there is more than one way to go. That’s a large part of what’s missing now.

Q. What do you see as the significance of the Nackey S. Loeb First Amendment Award and dinner?

A. The awards show is important because the First Amendment is for today. It shows it’s not just a yellowing document on display in Washington, D.C. The award shows how people and organizations speak out, often at their own risk, to right wrongs and to bring issues to light that contribute to the discussions we need to keep our democracy alive.

Q. What should we expect at the school from the new executive director, Laura Simoes?

A. The school is in great hands with Laura. We’ve been together at the school for the last couple of months to make sure there was a smooth transition. I’ve already seen she’s very excited about the school and will bring skills with her that I don’t have, including social media skills. She’s already planning new programs, and I can’t wait to see the new things she will bring to the school.

Q. What do you plan to do in retirement?

A. I’m sure I’ll be doing some writing. I’ve been freelance writing since leaving the AP, mostly for Concord Hospital. I also do some work for the New Hampshire Charitable Foundation and Fiddlehead magazine. And I’ll be taking classes at the school. I’m coming back next week to take a class on digital audio production. I hope to be spending more time with the kids, one of whom is out of state. And I may take music lessons again, 60 years after I first took them. It’s never too late.