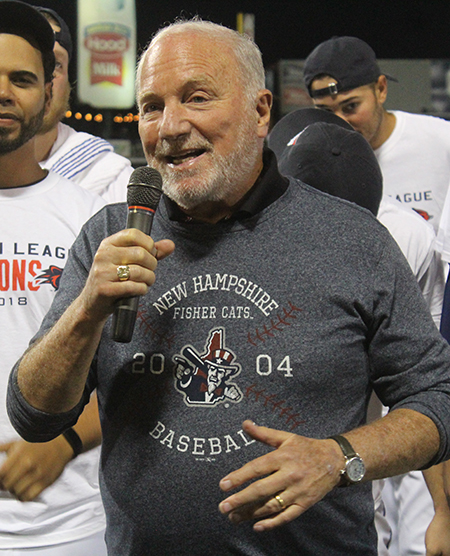 Art Solomon is the sole proprietor of the New Hampshire Fisher Cats in Manchester, a minor league affiliate of the Toronto Blue Jays in the Class AA Eastern League. He has had varied careers as, among other things, a real estate developer, investment banker and professor at the Massachusetts Institute of Technology. A lifelong baseball fan, his quest for a minor league team of his own began with fruitless inquiries into the possibility of buying the AAA Pawtucket Red Sox in Rhode Island. He has chronicled his career as a baseball entrepreneur in the 2012 book, he co-wrote with Allyn I. Freeman, “Making It in the Minors.”

Q. Well, Mr. Solomon, you certainly have a tough name to live up to. Is investing significant amounts of money into a minor league baseball venture an indication of wisdom?

A. Well, it’s certainly an indication that you want to have balance in your life and have some fun and follow one of your passions.

Q. You’ve said that when you bought into the Fisher Cats, you didn’t expect it to be as profitable for you as your various real estate ventures. How profitable has it been?

A. It’s modest. You really have to love the game. My basic interest in real estate is to buy and rebuild apartments. That’s business. Owning a minor league baseball team is really for the fun of it. I enjoy it immensely. You make a modest profit, but it wouldn’t be a full-time job.

A. It’s primarily a hobby. I’m a business guy. I don’t want to lose money, just making a modest profit. I went into it with that in mind and that’s how it turned out.

Q. Why is Manchester a good place for a minor league baseball team?

A. I think the state is very sports-minded, and that’s how it’s turned out to be. I had seen that the Manchester Monarchs had done well in Manchester, and I thought that if we were community-minded and would teach Little League clinics and visit hospitals and just be involved in the community in many ways, New Hampshire is the kind of state that would appreciate that kind of commitment. We have won awards multiple times for being the most community-oriented team in minor league baseball.

Q. What have been some of the Fisher Cats’ other community activities?

A. First, there is on annual basis the Granite State Baseball Dinner in Manchester with 1,200 people in attendance, with proceeds going to the Children’s Hospital at Dartmouth-Hitchcock. We hold baseball camps for kids and we have a reading challenge program for elementary school students. They commit to reading four books not assigned in the classroom, If the teacher signs off on it, each kid gets a couple of tickets to Fisher Cats games. We’ve gone in to all the dentists in the area with life-size portraits of Fisher Cats players. If the kids brush and floss as they should, they each get a couple of tickets. We probably have a couple hundred nonprofits a year that we do something with, like group outings in which some of the money from the ticket sales goes back to the organization.

Q. Did the proximity of the ballpark to major roads and highways factor into your decision to buy the team?

A. Yes, particularly going north and south. It’s very easy to get there from some parts of Merrimack Valley in Massachusetts.

Q. Is the presence of the Lowell Spinners, the Red Sox affiliate in the New York-Penn League, drawing away some of those Massachusetts fans who might otherwise drive a little further to see the Fisher Cats?

A. I don’t think so. We draw more than 20 percent of our fans from Massachusetts. For one thing, theirs is a shorter season. They don’t start until June because a lot of their players are right out of college. And they are in the lowest level of Class A ball. In our 14 years, 105 of our players have gone on to play in the major leagues. So Double-A is where the best baseball talent is.

Q. How has attendance been holding up?

Q. How much do those chilly nights in early to mid-April affect attendance?

A. Our attendance grows substantially once we get into the middle of May. Some of our revenue source is from whole-year sponsorships, but we definitely sell a lot more tickets come middle of May.

Q. How much time do you personally spend in New Hampshire?

A. I probably go to around 15 games a year. In the off-season, I’ll come up a couple of times a month in December and January. My office is in Waltham, so it’s only about a 45-minute drive.

Q. In your book, you noted that in decades past minor league baseball was typically played in outdated parks by teams with mom-and-pop owners who would line the field, sell tickets and run the concession stands. How did minor league baseball become the multimillion-dollar business that it is today?

A. I think more businesspeople acquired teams and a lot of new stadiums were built. The marketing has become more sophisticated and there are many more options for fans to come to the park, for concerts and different celebrations. We’ve had wedding renewals prior to a game. I think the level of entertainment (between innings) has improved now. There are a lot more options now than there used to be, with season tickets and semi-season tickets.

You might want to buy just the Sunday games when kids can come on the field for the base race after the games. Or you may want to buy the games when the (Red Sox affiliate) Portland Sea Dogs come in. We built the Sam Adams Bar and Grille behind left field, where fans can watch a Red Sox game, even as they follow the action on the field. And we’ve tried to include more fun things on the field.

Q. In minor league as well as major league baseball, the city, county or some government entity usually builds the ballpark, with all the modern amenities, and the team becomes the tenant. In 2004-05, Manchester built a $25 million stadium for the Fisher Cats. That is often called a public-private partnership, but critics have called it corporate welfare. What do you call it?

A. Well it costs us nearly a million dollars a year, so it’s hardly corporate welfare. Oftentimes building a stadium is a catalyst for economic development. You wouldn’t have had the new residential development or the Hilton Garden Inn or the Southern New Hampshire University building. In Bowling Green, Ky., the brand new ballpark was the catalyst for a significant amount of public and private development in the surrounding areas. If done right, it can be a win-win for both the public and private sectors.

Q. Why did you sell the Bowling Green team?

A. I used to be able to fly directly to Nashville and then drive one hour to Bowling Green. Then Southwest changed its route and I had to land in Maryland and change planes for Nashville. So I sold the team about five years ago.

Q. Does someone have to be a millionaire to buy a minor league team today?

A. No, I don’t think you have to be a millionaire. Some people put together a group to buy it. You can borrow some of the money as well, though the league doesn’t want you to borrow too much of the money. They want teams to be financially stable. When I bought (the Fisher Cats), the team was losing money. Gradually, over time, we’re doing better.

Q. Minor league baseball games everywhere feature brief funny little games and contests between half innings to entertain the fans, especially the children in the crowd. How important is that to the success of the franchise?

A. The entertainment factor is very important, and we have the best on-field entertainment of any team in the Eastern League. A lot of times people leave the park saying they liked the entertainment, but they don’t know the final score of the game.

Our mantra has always been “affordable family entertainment.” People have a lot of fun. At the same time, baseball offers businesspeople the opportunity to reward employees, existing customers or potential clients by bringing them to a game. Baseball more than any other sport offers opportunities to interact with people during the breaks that come after every half-inning, and that kind of interactivity is important for businesses.

Q. What’s new and different at the ballpark this year?

A. We’ve got a fabulous new video board, four times the size of the previous one, which had been there since the stadium opened. It can do many more things, including capturing plays on the field. It will provide more entertainment, more statistics and enable us to sell more ads.

Also we’ve got a split season this year, with teams winning the first or second half making the playoffs. That makes it more exciting for the fans. If your team gets off to a slow start, the second half starts a new season.

We’ll also have more promotions. We have four Latino nights at the park. You can’t say Fisher Cats in Spanish, but you can say “ferocious cats.” And we have a person who is head of diversity to expand our outreach to different communities.

Q. You began your quest to be a baseball entrepreneur by exploring the possibility of buying the Pawtucket Red Sox in Rhode Island. Do you still harbor hopes of one day owning a Triple-A team?

A. Not at this stage of my life.

Q. How would you sum up your experience with New Hampshire and the Fisher Cats thus far?

A. I think the experience has been fabulous. The people of New Hampshire have embraced the team. It’s a first-quality professional baseball team and the Fisher Cats have become an integral part of the community. We’ve made it more fun to live and work and be entertained in New Hampshire, and for that I’m very grateful.