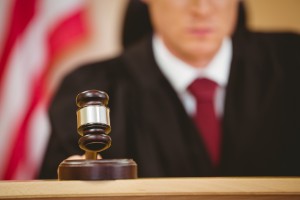 The House Legislative Administration Committee held a public hearing Jan. 13 on a proposed constitutional amendment that would allow for the recall and removal by petition of state court judges.

Judges in New Hampshire are appointed by the governor and serve until age 70. They can only be removed through impeachment.

CACR 27 provides that all “state court judges shall be subject to recall and removal from their offices and replacement by other persons by petition and vote of registered voters pursuant to such provisions as shall be established by the general court.”

One of the sponsors of the amendment, Rep. Norman Silber, R-Gilford, told the committee his constituents are “very upset about their treatment in the judicial system.”

“Right now, the citizens of our state have no practical way to remove judges whose behavior they think is improper, but that doesn’t rise to this supreme level that might justify impeachment,” he said. “Essentially, we have a situation with state court judges, many of whom are excellent — but some of whom are not so excellent — but neither category has any responsibility to the people of the state who pays their salaries.”

Silber told the committee 40 other states have provisions allowing for the recall of officials, with specific provisions.

“[A] number of years ago the Chief Justice of the California Supreme Court was recalled because she never approved the lower courts’ imposition of the death penalty,” Silber said. “Several members of the court sided with her and this stirred up a hornet’s nest. [In] the case of Rose Bird, she and some of her acolytes were recalled and replaced.”

California Supreme Court justices are selected by the governor but must be regularly reconfirmed by the electorate; prior to Bird, no California appellate judge had ever failed such a vote.

Richard Guerriero, president of the NH Bar Association, which represents over 5,000 attorneys, told the committee his organization unanimously opposes the amendment, citing the potential for political pressure.

“The NH Bar Association strongly opposes this proposal,” Guerriero said. “We see this as an effort that would politicize judicial decisions in court cases, and we think that is not proper. If judges are thinking about or pressured by efforts to remove them from office because of their actions in particular cases, that will politicize their position, which is not what our constitution intends.”

Guerriero addressed the importance of finding remedies for “isolated cases” when judges are “far out of line.”

“The normal remedy is you appeal the decision to the Supreme Court, and they correct that decision,” he said. “When you have instances of misconduct by a judge, we do have the Judicial Conduct Committee.”

New Hampshire was among the first states to adopt a code of judicial conduct,, and since 1977 the NH Supreme Court has overseen the disciplinary process for judges through the Judicial Conduct Committee.

“I would be concerned if the Judicial Conduct Committee was all lawyers, and I would feel like it’s inside baseball, but I can say, as president of the Bar, I just appointed a non-lawyer.”

In New Hampshire, the membership of the Judicial Conduct Committee, which investigates judicial misconduct and makes recommendations, consists of 11 members and 11 alternate members who are appointed under Supreme Court Rule 39 (2).

The Judicial Conduct Committee is made up of a combination of judges and lawyers, as well as people who are not lawyers, clerks of court, elected public officials, or judges, and who are appointed by the president of the Bar Association, the governor and the Supreme Court.

“Those people who get through that are fair and honest. And our Executive Council is not a rubber stamp,” he said. “We had a recommendation earlier this year where we said that person was ‘qualified with reservations,’ and that person ended up withdrawing their application. It’s not a rubber stamp and we think the process works fine the way it is.”

Asked whether judges have ‘free reign’ during their time in office, aside from Judicial Conduct Committee investigations, Guerriero said judges also face the appeal of their decisions to another court.

“The reality is that some of the most painful cases that people deal with in court are custody and divorce cases, and that’s why a lot of complaints arise,” Guerriero said. “The Professional Conduct Committee for Lawyers gets a huge number of complaints against lawyers handling divorce cases because people’s feelings are running so deep, and I get that reaction, but I do think it’s telling that you don’t see those complaints in other areas of the law. So it makes me think this [proposed amendment] is more attributable to the emotional nature and the personal importance for people in those cases than some systemic problem with judges.”

Dan Itse, a former state representative who testified, said his support for the amendment is questionable primarily because of the politization that Guerriero spoke about.

One reason for his testimony, he said, was to address the limits of the Judicial Conduct Committee that can sanction but not “take [judges] out of play.”

“There’s only one body that can remove them and that’s the Legislature,” he said.

There have only been two impeachments in the state of New Hampshire. The last one was in 2000, when former Supreme Court Justice David Brock was acquitted.