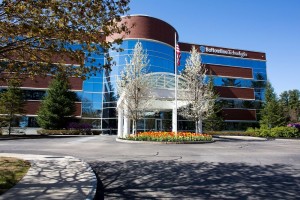 Bottomline Technologies’ headquarters are in the Pease International Tradeport.

Thoma Bravo, a San Francisco-based software private equity firm with more than $91 billion under management, completed its $2.6 billion acquisition of the publicly traded Portsmouth-based Bottomline Technologies on May 13. The deal, at $57 a share, was announced in December, and Bottomline shareholders overwhelmingly approved it on March 8.

Bottomline was founded in 1989 with the goal of replacing those precut paper checks with an electronic automated system. It went public a decade later, at $19 a share, and the company has become one of the leading financial technology companies, working with major corporations, insurers, law firms and banks. It currently has roughly 2,000 employees worldwide, with about a quarter of them working at its 100,000-square-foot, four-story headquarters at the Pease International Tradeport in Portsmouth

Three days before the closing, Bottomline filed its last quarterly report as a publicly traded company. As of March 31, it had $795 million in assets – $118 million in cash – and $379 million in liabilities, leaving stockholders with $417 million in equity.

In a press release, Thoma Bravo said shareholders received a premium of 42 percent over the price Bottomline stock was trading at before the company announced that it was up for sale.

In the third quarter of its fiscal year (the first quarter of the calendar year), Bottomline brought in $132 million in revenues, nearly all in subscriptions, which Bottomline has pushed to replace one time software purchases. That’s a 12 percent year-over-year increase, but expenses went up too and the company ended up losing $7.5 million, or 18 cents a share, more than the $4.8 million it lost the same quarter last year.

Fiscal year to date, the company has lost $29 million, but during that time it paid executives $42 million in stock based compensation. In the previous fiscal year, CEO Robert Eberle alone was paid $6.4 million, with $5.8 million in stock awards.

One of the first things Thoma Bravo did was replace Eberle with Craig Saks, who formerly worked for ACI Worldwide, another publicly traded payment software company located in Florida where he most recently served as development of strategies, partnerships and business models. A Bottomline filing with the Securities and Exchange Commission says that Saks had an “existing relationship with Thoma Bravo,” though it does not say what it was, and neither does Saks’ LinkedIn page.

“As a fintech and payments industry executive for the past 20 years, I have long admired Bottomline’s success and its ability to innovate ahead of the evolving B2B payments market,” said Saks. “The future for Bottomline is bright, and I am honored to have the opportunity to lead the talented team that has built the Company into an industry leader.”

Eberle joined Bottomline in 1998, shortly before it went public. He became CEO in 2006, and stepped down the day of the merger.

“The completion of this transaction marks the beginning of an exciting new chapter for Bottomline,” said Eberle. “I am proud of the leadership position and product set we have developed over the last several years to transform business payments for companies and financial institutions globally. … There are significant opportunities ahead for Bottomline in this dynamic and growing market, and I look forward to watching the company’s success for years to come.”

Eberle will continue to serve as strategic advisor to the Company through June 30 for a monthly consultant fee of $34,476.