It’s been operating for nearly 30 years, with contracts from corporate tech firms around the globe, but UNH’s Interoperability Lab has never had exposure like this.

In January, the IOL moved from its shared space with Goss International to a new 27,000-square-foot facility in downtown Durham, which will be open to the public on April 19 from 4 to 6 p.m.

The 100 undergraduate student interns and 15 paid graduate students who power the IOL previously had to catch a shuttle to work. Now the IOL is within walking distance to the main campus, surrounded by coffee shops and restaurants as well as tech incubator Alpha Loft and the research arm of the university, UNHInnovation.

The IOL has a full-time staff of 23, led by Executive Director Erica Johnson, but it’s mainly the students who perform tests on new products, to ensure they hold up to industry standards.

Right as you enter the lab’s entrance is a large events room with tall windows.

When NH Business Review visited, a small group of students were working with representatives from IOL member firms to test Power over Ethernet standards.

“Essentially, we host week-long events testing particular technologies that typically are new or newer, where they haven’t been fully deployed yet, and so companies can come together, work on those open standards, and figure out any problems before it’s too late or too costly,” said Johnson.

Every conference phone is hooked up to Ethernet cables through the Ethernet jack in the wall, but this Ethernet cord would power the phone as well, versus having a separate power source.

“This is actually a pretty old standard, but they’re always ratifying it and making new changes. And so they’re here testing the latest,” said Johnson. “And actually, we’re looking to create some kind of a logo or certification program, working with the Ethernet Alliance, in order to market and advertise conformant devices and products to these type of standards, so when you’re a user and you go to Best Buy, you can recognize that sticker, just like a Wi-Fi sticker [so you know it’s been tested].”

Johnson is chair of the Open Networking Foundation Testing Leadership Council (which develops policies, procedures and guidelines for network testing programs) and co-chair of the Internet Protocol Version 6 Forum’s IPV6 Ready Logo Program (the most recent version that provides an identification and location system for network computers and routes traffic across the internet).

Johnson and her staff’s involvement and industry recognition in worldwide organizations promote the expertise of the IOL and draw in customers from the West Coast, Europe and the Asia-Pacific region to the facility.

Although not all member businesses will visit the IOL, many do – the IOL offers up to 30 group test events, known as Plugfests, each year, which can draw up to 80 people.

“So we’ll have different companies working alongside each other that are essentially competitors, and we’re the neutral ground, to bring the companies together and help mediate any sort of standard issues or problems, to help them work together, so it benefits the end-users,” said Johnson.

In a separate space, students test products sent to the IOL. Johnson estimates about 100 to 150 products are shipped per week, with testing and reports completed typically within a week, although sometimes it can take a month or two. The IOL will also license testing equipment to companies to perform the tests in their own lab.

The IOL has developed some test suites on a test platform built by QA Cafe IP Test Solutions in Portsmouth, which works jointly with UNH in licensing equipment to companies.  Founder Joe McEachern worked at the IOL as graduate student. He says nine out of his 12 employees worked at the IOL.

“There’s nowhere else locally you’d find someone with that direct type of experience, and interest in the space as well, so it’s definitely the first place we look when we’re trying to add people to our team,” he said.

Students are in charge of setting up, testing, working with companies, debugging issues and helping them solve problems. Most students are computer science and electrical computer engineering majors, and gain experience in different consortiums such as Ethernets or broadband.

The IOL has a job placement rate of 99 percent, said Johnson, because students often meet future employers through the IOL.

“That’s why the placement is so high because these students have been working directly with these companies for potentially four to six years, and so the companies get to know them, they understand what their capabilities are, and the students get the offers before they even graduate and go right into continuing what they are doing here, with the company,” said Johnson.

And with 25 different consortiums, students pick up experience in a few different testing areas including wireless, DSL, routing/SDN and Fibre Channel storage.

“Almost every consortium has some level of software scripting, and they get hands on experience with the hardware and learning the lower layer type of testing. It’s not just sitting in a classroom and coding, here they get to see how it’s applied rather than just one small area,” said Johnson.

“I think the UNH curriculum and my experience at the IOL has actually combined together quite nicely,” said Morneau. “The UNH computer science curriculum is very theory- and code-based, which is awesome, however so far has lacked a little bit of networking, which I have gained a huge amount of experience in while working at the lab which allowed me to be a much more rounded person professionally.”

Morneau has been working at the lab since March 2014. When he visited UNH on an admitted students day, Associate Professor and Chair of the Computer Science Department Radim Bartos recommended he check out the IOL, saying it would help Morneau make his decision to attend.

“I came to UNH to specifically work here,” he said.

“It’s not just a one-semester internship. It’s a career, it’s a part-time job, essentially, so they can start as they’re a freshmen and go throughout their whole college career as an undergraduate, and potentially stay on as a graduate student,” said Johnson.

Johnson is the prime example of how students can build their professional skills and careers at the IOL.

Entering her junior year at UNH, Johnson started working at the IOL, acting upon encouragement from a classmate.

“I ended up being a test technician and grew my responsibilities and my role from there,” she said. “So when I graduated, I ended up managing multiple business units and was very successful, and I enjoyed the business side equally as much as the technical side.” 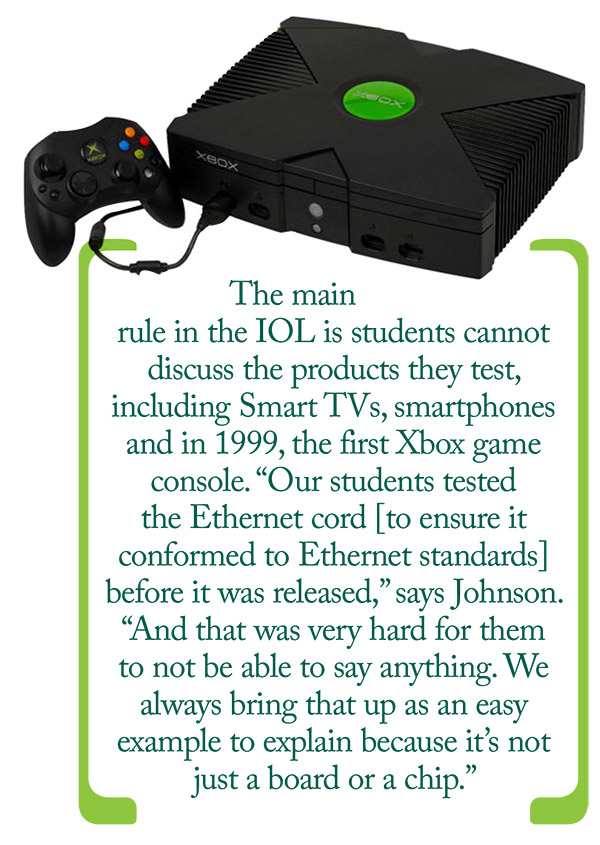 Originally founded in 1988, the IOL originally consisted of four separate labs. After graduation, she became a full-time staffer in the early 2000s, and Johnson was part of the initial drive to assemble all four separate campus locations into a single lab in 2002. In 2007, she took over for founding director, tasked with updating the IOL and making it sustainable.

Although under the umbrella of UNH, the IOL is 100 percent commercially funded.

The IOL also is playing a role in getting students interested in STEM early.

The IOL puts on workshops for schools in the Seacoast area for students ranging from 3rd to 12th grade. John, a junior at Traip Academy in Kittery, Maine – the school would not allow the last name of a minor to be disclosed – was job-shadowing Morneau at the IOL that day.

“I’ve built my own computer, setting up different servers with friends for games and such, helping friends and family trouble shoot computer and networking problems,” said John, who is interested in studying computer science, computer engineering or mechanical engineering.

Having been led to the IOL by a mentor, Johnson openly acts as a mentor to students.

“That was very influential,” she said. “I am very approachable, working with students, sitting down by them to ask what their thoughts are in terms of strategy and where the lab should go, mentoring them in terms of where they want to go in their career and opening those doors and working on projects that help them get toward their next step.”

Look below for more photos of the IOL