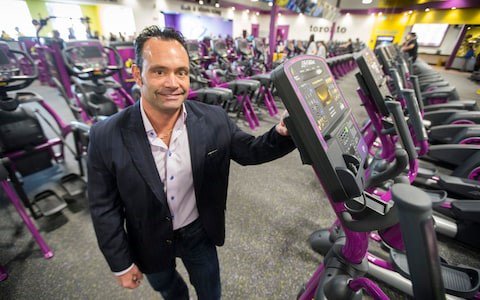 Planet Fitness will be the “official workout partner” of a prime-time reality TV show where contestants run a mile against various obstacles, including world class athletic “defenders,” to win $1 million.

The contestants will warm up in a Planet Fitness gym (near Hollywood of course) and get a two-minute head start on the defenders, one of which includes a Green Beret and Army “Athlete of the Year.”

“At Planet Fitness, we encourage our members inside and outside of our clubs to achieve their goals, whether big or small, and we’re here to cheer them on along their journeys,” said Roger Chacko, chief commercial officer at Planet Fitness. “We’re thrilled to be a part of ‘Million Dollar Mile’ and help everyday people step out of their comfort zones and support them on their quest for victory and potentially $1,000,000.”

The gym franchise, which is based and employs 250 people in Hampton, has been growing rapidly and has money to spend on this kind of thing.

According to its last filing at the beginning of March, Planet Fitness reported $573 million in revenue, a third more than the previous year, and a net income of $103 million, almost double 2017’s profits.

Almost all of those stores are franchised, though some are corporately owned, including many of the 15 stores in New Hampshire. Planet Fitness makes money via franchise fees, including a percentage of the dues of the members – now up to 12.5 million – in addition to profits from the corporate stores and selling equipment to both.

As a result, the company now has $1.35 billion in assets, with $289 million in cash, and that’s after the company offered to buy back $300 million in stock in November. Planet Fitness also has $1.6 billion in debt, resulting in a shareholder deficit of $375 million, but that doesn’t seem to be a problem as long as the company continues to grow.

And it hopes to do just that, partly by building its brand, which it claims is now the No. 1 fitness brand, confirmed by the high-profile sponsorship of the CBS program and the sponsorship of the New Year’s Eve ball drop in New York (and celebration in Los Angeles the year prior), helping the company reach a billion viewers just as they are making their resolutions.

“I think it’s a great splash for us,” said CEO Chris Rondeau at the end of a conference call transcribed by Seeking Alpha. “I mean it’s so many viewers, it blows the Super Bowl away and it’s all us for four hours. So it’s a great thing that we plan on doing hopefully for many years to come.”

The company also hopes to grow the number of stores. Planet Fitness believes there is room to increase its store base in the U.S. to 4,000.  Already franchisees have signed agreements to open about 1,000 stores including 500 in the next three years.

“Real estate trends appear to remain in our favor as many bricks and mortar retailers continue to close stores and landlords are increasingly looking to Planet Fitness as key tenants who drive traffic to their centers,” Rondeau said. “In addition, we are also working with a variety of retailers who are looking to downsize their boxes in markets, where we’re looking to expand our presence.”

Last week, Planet Fitness and national retailer Kohl’s announced a strategic collaboration to open up 10 Planet Fitness stores with 20,000 to 25,000 square feet of space adjacent to each department store. It’s not clear whether Planet Fitness would be taking up former Kohl’s space or opening up in vacant space next to Kohl’s, or both, but Kohl’s CEO Michelle Gass, praise of the “rightsizing strategy” seems to indicate the former.

“In today’s evolving retail landscape, our differentiated approach to fitness continues to drive traffic to shopping centers across the country,” said Rondeau.