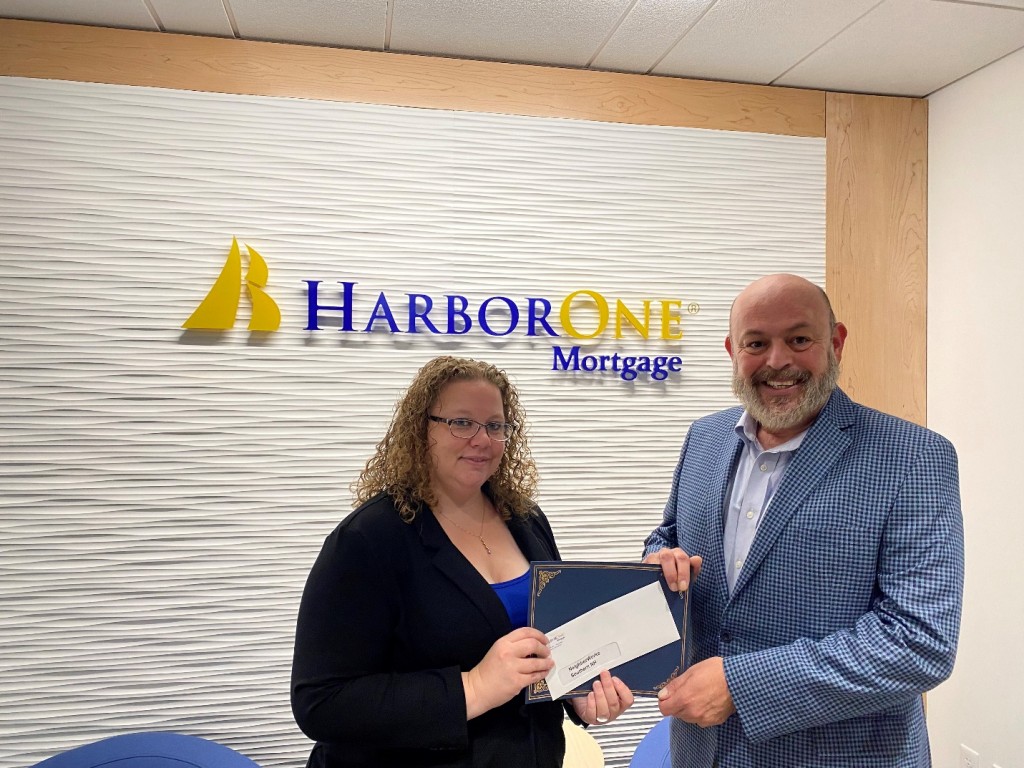 Anita Wolcott of HarborOne Mortgage presents a $5,000 donation from the company to Paul McLaughlin, home ownership director at NeighborWorks Southern New Hampshire in support of the organization’s homeownership and financial wellness education seminars and one-on-one counseling through HOMEteam, a collaborative program with a geographic footprint that extends from southern New Hampshire to the Lakes Region.

September high-end sales on the Seacoast set a new volume record for the second time in three months even though overall volume numbers cooled, according to the Seacoast Board of Realtors. They found that sales in the 13 towns they monitor each month, 24 homes sold for $1 million or more broke, breaking the previous mark of 22, which was set in July. Nine of the sales in September topped $2 million, and three were over $3 million.  But overall, single-family sales were off 9.6% from 2020 with yet another record low of monthly inventory.  Meanwhile condominium inventory also set a September record for lowest total of available units, leading to a 42.6% drop in sales from last year.

The 68-room Quality Inn Merrimack has been sold to Nai Allied LLC,

Wason Associates Hospitality Real Estate Brokerage Group of Portsmouth has announced. The hotel, which is located on 2.6 acres, has seen “steady improvement” in room revenues over the years,” according to Earle Wason, who brokered the sale.

The Greater Concord Chamber of Commerce will be hosting a forum on Thursday, Oct. 14, that addresses two key issues — housing and child care. The panel of speakers includes: Brian Gottlob, director of the Economic and Labor Market Information Bureau at New Hampshire Department of Employment Security; George Reagan, community engagement manager at the New Hampshire Housing Finance Authority; and   Matt Walsh, director of redevelopment, downtown services and special projects for the city of Concord. The forum will run from 7:30 to 9 a.m. and be held at the Holiday Inn, 172 N. Main St., Concord. For more information, visit concordnhchamber.com.

A recent ribbon-cutting ceremony marked the official completion of $17.8 million in improvements at the Cooperative Middle School in Stratham. The project, completed a month ahead of schedule, was handled by Harvey Construction of Bedford with architecture and engineering services provided by Maine-based Harriman.

The sale of three buildings and three vacant lots at 30 Ohio Ave., Manchester, has been sold by JAB Ohio Ave Inc., to DA Boisvert Electric.  Tom Dickson of Stebbins Commercial Properties represented JAB and assisted the buyer in the transaction. According to the Hillsborough County Registry of Deeds, sale price was $350,000.