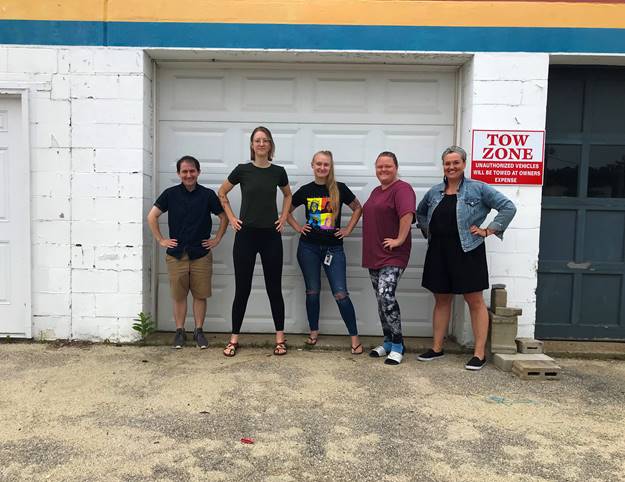 Waypoint’s Youth Services staff in Rochester stands in front of the building at 3 Wallace St. that the organization recently purchased as a site for a youth resource center, the first drop-in center for youth and young adults who are experiencing housing instability in the Rochester-Somersworth-Dover region. Staff members are from left, Joss Birnie, Ariel Hayes, Tori Bird, Amy Malone and Mandy Lancaster.

Westborough, Mass.-based Racing Mart Fuels LLC has acquired Dinkbee’s Convenience Store in Keene, a sale that included a convenience store with gasoline and diesel fuel and the Keene Klean laundromat. C-Store Investments LLC, a Gilford-consulting firm that provides advisory services to the convenience store and retail petroleum industry, handled the sale process for Toby Tousley and his wife, who owned and operated Dinkbee’s and Keene Klean.

Bangor Savings Bank has made a $5,000 contribution to NeighborWorks Southern New Hampshire in support of the organization’s HOMEteam program, which provides homeownership and financial wellness education and counseling services to New Hampshire residents.

Kodiak Building Partners of Victoria, Texas, has acquired Ricci Lumber of Portsmouth, New Hampshire effective July 1. Ricci Lumber was founded in 1957 in Portsmouth, and serves the lumber and hardware needs of customers in New Hampshire, Maine and Massachusetts. Ed Hayes, president of Ricci Lumber, will retain his position at the company, which will become part of Kodiak’s Building Materials.