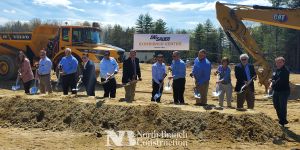 Casella Waste Systems, in partnership with Rudarpa Inc., has officially broken ground on a renewable natural gas processing facility at its North Country Environmental Services landfill in Bethlehem. The project will be the first of its kind in New Hampshire, Casella said. The facility is designed to capture the landfill gas that is currently being flared and separate it into marketable gases, with primary emphasis on methane and carbon dioxide. Once processed, the RNG will be transported by truck for injection into existing pipeline facilities owned by Liberty Utilities. The emissions reduction from converting the landfill gas into a transportation fuel is estimated to be 78,000 tons of greenhouse gas emissions annually, which is equivalent to taking more than 15,000 passenger cars off the road.

Brian and Kara Dillard of Barrington have purchased Artie’s Subs & Pizza in Moultonborough from Arthur and Patricia Tgibedes, who operated Artie’s for the past 27 years. Rick Hagan of Roche Realty Group in Meredith represented both the seller and buyer in the transaction.

Merrimack County Savings Bank has purchased $25,000 in tax credits through the New Hampshire Community Development Finance Authority in support of the Mill City Park project in Franklin. Funds support the organization’s goal of developing both land and water components into a whitewater park along the Winnipesaukee River adjacent to downtown Franklin. The land-based part of the park, which recently broke ground, is expected to open this summer. Groundbreaking for the first whitewater feature  will be held July 12.

More than 250 job-seekers turned out earlier this month for the first Construction Virtual Career Fair in which 50 New Hampshire employers took part. According to Associated Builders & Contractors, which presented the event along with I Build NH and New Hampshire Employment Security, more than 1,600 positions were available, ranging from field and office positions and entry-level to experienced. Job-seekers can visit I Build NH website, which features a listing of construction-related businesses hiring in New Hampshire. Employers can add their business’ name to the list of hiring companies by contacting b at ABC NH/VT at jennifer@abcnhvt.org or 603-496-2678.

Savings Bank of Walpole has announced plans to add up to 10 new jobs and expand office space in Keene in the coming months. The bank has secured 5,000 square feet of leased space on Kit Street, adjacent to the Filtrine Manufacturing facility, and plans to move in mid-June.  The new office will be home to the bank’s existing customer resource center, which will be led by Kathy Settipane.

The New Hampshire Liquor Commission is opening new NH Liquor & Wine Outlets, in New London and Littleton, this week. The new 10,000-square-foot Littleton store at 804 Meadow St. in the Kilburn Ledge Plaza, opened May 24. The New London Outlet, opening on May 27, is a 6,300-square-foot building in the New London Shopping Center at 293 Newport Rd.

XSS Hotels, Hooksett, has acquired a controlling interest in two properties in Portland, Maine: the Portland Harbor Hotel and the Inn At Diamond Cove. The original developer of both properties, Bateman Partners LLC retains a minority interest while Colwen Hotels also acquires a minority interest. Portland Harbor Hotel is a 101-room hotel in Portland’s Old Port District.  The Inn at Diamond Cove has 44 guest rooms and suites on Great Diamond Island in Casco Bay.

Outdoor apparel and equipment company Columbia Sportswear will be opening a factory store on June 4 at Tanger Outlets Tilton.