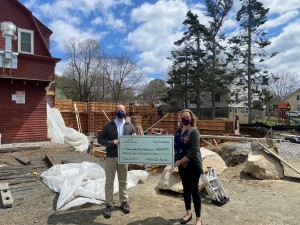 Former Dover City Councilor Matt Mayberry has been named the new executive director of the NH Home Builders Association. Mayberry, a longtime Realtor with 25 years of real estate and development experience, is also a former commissioner of the New Hampshire Human Rights Commission and a former candidate for the Republican nomination in the 1st Congressional District. Mayberry was chosen from over 70 candidates, said the organization’s interim president, Joe Harnois of Atlantic Builders Supply.

Van Otis Chocolates, a longtime mainstay in Manchester, is opening its first satellite store, a new retail location at 15 S. Main St. in Wolfeboro. Van Otis will open its new store the week of May 24. It will be open seven days a week throughout the summer.

North Branch Construction, Concord, has announced the addition of Richard LeVinus, Daniel Salmonson and Katie St. Jean to the company. LeVinus joins the firm as safety director. Salmonson gas been hired as a project superintendent, and St. Jean has joined the firm as receptionist.

Chris Langlois has joined the Dow Realty Group, Portsmouth. Prior to starting his real estate career, he ran his own auto dealership in Kingston. Dow started in Wolfeboro and now has teams in the Lakes Region, White Mountains and Seacoast.

Steven M. Caulfield of Turner Building Science & Design, part of the Concord-based H.L. Turner Group, has been selected as one of the 2020 recipients of the American Industrial Hygiene Association Best Seller Award for his work on the publication, “Recognition, Evaluation, and Control of Indoor Mold.” The award is presented to the editor of a new publication that sold the most copies during the past year.