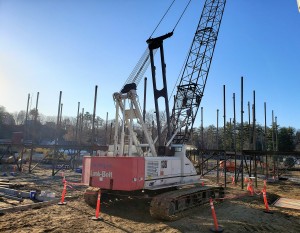 Construction continues at the site of the Peabody Home’s new 63,632-square-foot Peabody Place facility in Franklin. Phase one of the project will result in a new assisted living and memory care center scheduled to be completed in late 2021. After phase one is completed and residents move into the new space, the original building will be demolished and new independent living apartments will be built at the site. Both phases will be integrated into a single three-story building that features a granite and brick façade and large manor windows. Phase two is expected to be completed in late 202.

Jennifer Landon has been promoted to vice president of education and workforce development at the Associated Builders and Contractors New Hampshire/Vermont Chapter. Landon, who has been with the ABC since 2017, was previously director of education and workforce development. In her new role, Landon will also serve as advisor for the Construction Sector Partnership Initiative, which helps businesses address their workforce needs and helps workers prepare for and advance in careers in construction.

New Hampshire’s congressional delegation – U.S. Sens. Jeanne Shaheen and Maggie Hassan and U.S. Reps. Annie Kuster and Chris Pappas – have announced that the state will receive $3.1 million from the U.S. Department of Housing and Urban Development’s Housing Trust Fund program to support affordable housing for Granite Staters throughout the state.

Cheryl Smith has joined TFMoran as office manager for the Seacoast Division in Portsmouth. She has over 30 years of experience in business and operations management, having held various managerial positions for Seacoast area businesses.

Another Roche Realty agent, Maggie Braxton of the firm’s Meredith office, recently represented Lynn Rainen and Mark Koester, owners of the Nutmeg Inn in Meredith in the sale of the inn to Kevin and Karen Lasella of Goffstown. The Lasellas were represented by Regina Galasso of Keller Williams Lakes & Mountains.  The inn, which sits on seven acres, is included in the New Hampshire Registry of Historic Places.

Eli Leino, an attorney who specializes land use and real estate issues, has joined Primmer Piper Eggleston and Cramer’s Manchester office. Prior to joining Primmer, Leino worked for a commercial and residential real estate developer in New England.