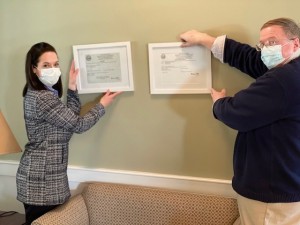 Nine industrial buildings in Massachusetts and New Hampshire totaling 700,000 square feet have been sold Boston-based real estate investment firm BentallGreenOak. The nine-building portfolio includes two buildings in Londonderry at 34A and 34B Londonderry Rd. – as well as four buildings in Wilmington, Mass., and three in Billerica, Mass. A CBRE team led by Chris Skeffington and Scott Dragos represented the seller, Novaya Real Estate Ventures, and also procured the buyer. At the time of sale, the portfolio was 94% leased to a diverse roster of tenants including Symbotic, Conformis, Locus Robotics and Lindenmeyr Munroe, among others.

Deanna Caron of Stebbins Commercial Properties has announced the sale of the former Howes Pharmacy building at 39 Main St., Goffstown, for $275,000. The 2,016-square-foot building was sold to Richard Thomas. Thomas, a CPA whose office is currently located at 20 Main St. plans to move to the new location this summer.