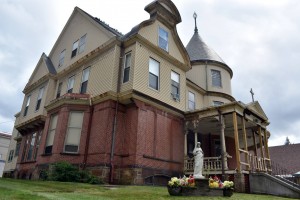 The Currier Museum of Art in Manchester has completed the purchase of the 19th century George Byron Chandler House, which sits across the street from the museum. “The Chandler House is one of the most beautiful Victorian houses in New Hampshire but has been almost unknown,” said Stephen Duprey, president of the museum’s board of trustees. “We can now begin the challenging job of restoring the house so that it can be enjoyed by the community.” The main floor of the house features stained glass windows, original wallpaper and fine wood carving. These areas will be open to the public as an expansion of the museum, specifically to represent New Hampshire in the 19th century. The Chandler House joins the museum’s two houses designed by Frank Lloyd Wright in presenting the architectural heritage of the region.

AI Norwood Group has announced the sale of 1 Somersworth Plaza in Somersworth to Yuan Ze 2LLC for $339,900. The 8,400-square-foot retail strip plaza, formerly known as Lucky Supermarket, was owned and operated by LDL Enterprises for several years. The buyer of the property is an investor, and plans to put the property on the market for lease in the near future, said Deana Ardenof from NAI Norwood Group, who represented LDL Enterprises in the transaction.

Roche Realty Group has announced the sale of the Lakeland School property on Meredith Center Road and Route 104 in Meredith. The property includes 5.27 acres an a 13,000-square-foot building, formerly known as The Wicwas Lodge, with views overlooking Lake Wicwas.  George Hurt of Roche Realty Group represented the seller in the transaction.

Meredith Village Savings Bank has purchased $25,000 in tax credits through the New HampshireCommunity Development Finance Authority to support the Mill City Park project in Franklin. Funds will help support the organization’s goal of developing both land and water components into a whitewater park along the Winnipesaukee River adjacent to downtown Franklin, the first of its kind in New England.

The 80-room White Mountain Hotel & Resortin North Conway will soon begin a $3.5 million renovation and redesign of all guest rooms and suites as well as extensive exterior improvements. The project, slated to start March 1, is scheduled to be completed by Memorial Day weekend.  The hotel and its 120 seat Ledges Restaurant and Tullamore Tavern will be closed during that period. Interior design firm Truexcullins, based in Burlington, Vt., has been hired to undertake the project.  Others taking part are Ed Poliquin of North Conway, construction consultant for the project, DH-Companies of Manassas, Va., Gary Chicoine Constructionof Weare, general contractor, Saint-Damase Hotel Furniture of Quebec, Serta Mattress and Revolution Furnishings of Manchester.

Mark Danahy has joined New Hampshire Mutual Bancorp as senior vice president of residential lending. Danahy previously served as president and CEO at KeyBank Mortgage, based in Cleveland, Ohio, and in executive leadership roles at Citibank and PHH Mortgage, based in Mt Laurel, N.J.