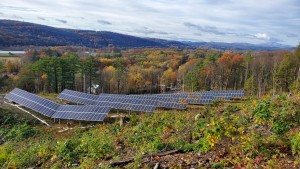 Norwich Solar Technologies of White River Junction, Vt., has announced completion of a community solar project in Charlestown, NH, that allows member-owners to receive on-bill credits for their ownership share of the solar array’s net-metered electric output each month. Group net metering has been available in New Hampshire for a few years, but only recently could participants receive credits on their electric bills directly. Norwich Solar said the Charlestown project is the first of many it plans to develop and construct in New Hampshire.

The sale of 883-885 Second St., Manchester. has been announced by Andrew Robbins of Colliers International’s Manchester office. Robbins represented the seller, and Jay Lee of Berkshire Hathaway Verani represented the buyer, International Car Parts of NH in the transaction. According to the Hillsborough County Registry of Deeds, the two-story, retail 2,604-square-foot building and adjacent 1,849-square-foot single-unit apartment building sold for $475,000.

Al Terry Plumbing & Heating, Hooksett, has hired plumbing and HVAC specialists Daniel Desrosiers, who has 25 years of experience in the HVAC construction industry, and Cody Berthiaume, who has been in the commercial plumbing and HVAC industry for seven years.

Chase Pennoyer, who joined Concord-based Resilient Buildings Group Inc. in 2016, has been promoted to vice president of operations.

Building 6, one of three multi-unit apartment buildings under construction by North Branch Construction in Phase II at the Wallace Farm Apartment Homes community on Bridle Path Lane in Londonderry, has been issued a certificate of occupancy. Units are currently being rented in the newly completed building and tenant move-in has begun. Building 5 was completed in October, and Building 8, the remaining building in Phase 2, remains under construction and is on schedule to be completed this month. Christopher Fokas of Wallace Farm Development is developer of the project.

North Branch also has begun work on a 6,900-square-foot pre-engineered steel building housing a testing and engineering range at the Sig Sauer Academy campus in Epping. Construction is expected to be complete by late spring 2021. Port One Architects of Portsmouth is providing architectural design services, Jones & Beach Engineers, Inc. is providing civil engineering services, and Trexler Engineering is the structural engineer for the project.

Paugus Properties LLC, owned by developer Scott Everett, has selected Bonnette, Page & Stone Corp.of Laconia to manage construction of the next phase of 1 Elm, the Lakeport revitalization effort. The project will involve demolition of two existing properties at the site and construction of a mixed-use development that will include some retail space, leasable apartments and purchasable condos. Construction will begin early t his year with anticipated completion in 2022. Bonnette, Page & Stone, will work directly with Paugus Properties’ construction project manager, Mike Lokken.

Nicholas Golon of Bedford has become a principal of Bedford-based TFMoran. Golon, who joined TFMoran’s Civil Engineering Department in July 2006, is a licensed Professional Engineer in New Hampshire and Maine.

Merrimack County Savings Bank has purchased $10,000 in tax credits through the New Hampshire Community Development Finance Authority in support of the Currier Museum of Art. The investment contributes to the Currier’s artist-in-residence program, “Artists in the Community, Revitalizing a Manchester Neighborhood,” which includes the purchase of a Victorian house on 647 Beech Street in Manchester to house visiting artists.

Construction will begin shortly on a new 13,000-square-foot NH Liquor & Wine Outlet at 850 Gold St., Manchester, off South Willow Street. It is slated to open by the end of 2021.

Mike Reed, president of Stebbins Commercial Properties, has announced the sale of a 35,000-square-foot office/warehouse building at 305 Massabesic St. Reed represented the Seller, Ty-Flot Inc. and assisted the buyer, Tokena Corp. in the transaction. According to the Registry of Deeds, the sale price was $2.6 million.

NAI Norwood Group has announce the sale of 30 Willand Drive in Somersworth to the city of Dover for $749,900. The 6,720-square-foot office/retail building was formerly owned and occupied by Mr. B’s TaeKwon Do. The city purchased the building to use as a regional emergency overnight walk-in warming center for the area’s homeless as part of a partnership of the cities of Dover, Somersworth and Rochester and Strafford County.