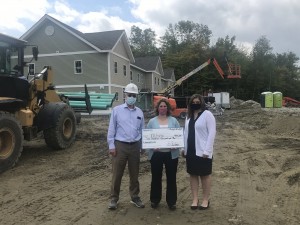 Real estate sales on the Seacoast set records in August, according to the Seacoast Board of Realtors. They reported that the month ended with the fewest active single-family listings ever, but with 17 $1 million-plus sales – the most ever recorded. The 126 total sales was the most for the month August since 2018. The median price of $550,000 was up 9.4% from last year, but well off the year’s record high of $612,500 set in June. Available condo listings hit an all-time August low and the fewest since December.

Ground was broke recently at The Founders Academy in Manchester for the school’s 6th grade expansion project. When completed, the new space will add four new classrooms, office/meeting space for students and teachers, storage, lockers, and outdoor access for 6th graders in new wing. Northpoint Construction Management of Hudson is in charge of the construction, which is slated to be completed at the end of October.

Bedford Design Consultants, a civil engineering and land surveying firm, has purchased a new office at 592 Harvey Rd. in Manchester, near Manchester-Boston Regional Airport.Ronald Fredette of Keller Williams was instrumental in the purchase of the property.