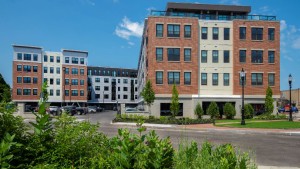 Fulcrum Associates of Amherst last month completed work on the Orpheum Apartments in downtown Dover, Construction of the luxury apartments at 104 Washington St. began in June of 2018, beginning with the demolition of the Robbins Block. The five-story, 157,000-square-foot building has 130 units, topped by a rooftop lounge and terrace. Off the lobby, residents have access to a café, a lounge area with a fireplace and gallery seating, a fitness center and a pet-washing station. In addition, a co-working space with variously sized offices is available for lease.

ApprenticeshipNH, an initiative run by the Community College System of New Hampshire, has announced a new partnership with EnviroVantageof Epping, an environmental and specialty services contractor. The Registered Apprenticeship program will begin in September when EnviroVantage will hire of 10 apprentices to begin training. The hazardous waste material technician Registered Apprenticeship includes 4,000 hours (roughly two years) of on-the-job training and 288 hours of classroom instruction at the EnviroVantage training facility in Northwood with instruction taught through a partnership with Great Bay Community College.

For the second consecutive year, Manchester-based Clear Choice Home Improvements has been ranked on Qualified Remodeler Top 500, a list of the largest remodeling firms in the nation ranked by revenue. Founded by Josh MacMichael, Clear Choice has grown from $1.2 million in revenue in 2011 to $14.6 million in 2019 and is on track to grow to more than $15 million in 2020, the company said. The firm was ranked No. 111 in the United States and No. 1 in New Hampshire.

Sanborn, Head & Associates Inc. has announced that its president, Barret Cole, has been given the added title of CEO. The firm also has announced that Executive Vice President, Matthew Poirier will add the chief operating officer title. Charles Head, who has held the CEO title since 2005, will take on the title of founding principal as he continues to serve as chair of the company’s board of directors. Cole has served as the company’s president and Poirier as executive vice president since 2015.

The Epping Planning Board granted site plan approval to Allen & Major Associates Inc. for a proposed live-work program for Farmsteads of New England. A&M is providing land survey, civil engineering, permitting and landscape architecture services to the nonprofit, which provides services for adults with autism and other developmental disabilities.

The project capitalizes on the farming potential of the property and will also be able to offer residences for those who want to live and work on-site. The site plan includes eight single-story buildings, each with four studio-size units, a barn and a greenhouse. A&M’s senior project manager isBrian Jones.

The towns of Fremont and Wilton have received 2020 AARP Community Challenge grants. In Fremont, the grant will be used to construct a ramp with railings that will allow safe and full accessibility to the town’s Memorial Park Ballfields. In Wilton, the grant will be used to build an ADA-compliant walkway along the bank of the Stony Brook River to provide river access and a connection to a veterans’ Memorial Park and the downtown core.