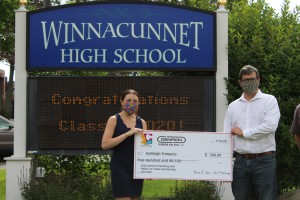 Ashleigh Trimarco of Winnacunnet High School, left, was recently awarded the 2020 Denron Plumbing and HVAC Trade Scholarship from the ACE Mentor Program of New Hampshire, an after-school program designed to promote careers in architecture, construction and engineer to high school students. The Denron scholarship is awarded to one graduating senior who exhibits exceptional engagement in each year’s program.

Sabbow & Co., a Concord-based manufacturer of manufactures precast concrete products and granite monuments, has received a $1.5 million line of credit and $5 million in term loans through the New Hampshire Business Finance Authority’s loan guarantee program. The loans are being provided by Nashua-based Millyard Bank. Sabbow, established in 1990, operates three facilities in New Hampshire with over 80 employees.

The Federal Transit Administration has awarded some $822,000 in transit infrastructure funding through its

Buses and Bus Facilities Program to the city of Nashua, which will use the money to help renovate the Nashua Transit System Transit Center. Upgrades include improving lighting and camera systems as well as incorporating on-time bus arrival and departure data, Wi-Fi and automatic announcements and displays.

The New Hampshire Charitable Foundation has awarded $1.2 million in grants from its Upper Connecticut River Mitigation and Enhancement Fund awarded to support 11 projects across the Upper Connecticut River watershed. Among them were: American Rivers received $601,102 to support the continued removal of the Gale River Dam in Bethlehem; The Connecticut River Conservancy received three grants totaling $181,300 for design, permitting and outreach related to the proposed removal of significant recreational hazards at remnant dams located in North Stratford, NH, and Guildhall, Vt. as well as for engineering design and permitting for the ongoing Kimball Brook dam removal project and to conduct 14 riparian buffer plantings in floodplain forests and former agricultural lands throughout Vermont and New Hampshire; the Society for the Protection of New Hampshire Forests received $46,200 to support the Ammonoosuc River Protection Project in Bethlehem; and The Trust for Public Land received $102,000 to purchase and permanently conserve — in partnership with the town of Hanover — a 250-acre property in the Mink Brook watershed.

Scott Knowles of RE/MAX Bayside was recently recognized for outstanding sales performance for the first half of 2020 by RE/MAX of New England. For the first six months of the year, he was the top agent in commission income in the state and eighth in New England.

Engineering and environmental consulting firm Fuss & O’Neillhas been named a “Best Firm to Work For” by the Zweig Group, which annual holds a contest for employers in the architecture, engineering and construction industries. Based in Connecticut, Fuss & O’Neill has an office in Manchester, NH.

Akumina of Nashua is working with Boston Properties, a publicly-held developer and owner of Class A office properties across the U.S., to help the organization better engage and communicate with their more than 1,200 employees and service providers. As a commercial real estate company with 196 properties across five regions, BXP’s newly designed intranet built on Akumina’s platform will drive and deliver intuitive access to resources and content, officials said.

Great NH Restaurants has announced it will be opening its sixth T-Bones Great American Eatery in mid-September in Concord. The restaurant, at 404 S. Main St., adjacent to the new Tru by Hilton hotel off Exit 12S of Interstate 93, was supposed to open in May but was delayed because of the Covid-19 pandemic.

Design For A Difference, a charitable program launched by The International Design Guild, is seeking entries in its Home Is Where The Heart, which will award free flooring and expert design advice to front-line workers and others who are standing out in helping their community during the pandemic. The top prize is valued at up to $10,000, and there are four secondary prizes awarded valued at up to $2,500. The International Design Guild is a division of Manchester-based CCA Global Partners. To submit a submit a nomination click here.