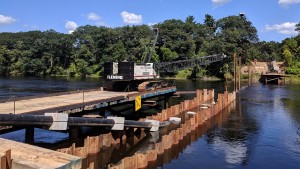 Tighe & Bond Inc. was recently honored with a Silver Award for Engineering Excellence by the American Council of Engineering Companies-NH for its work with Pennichuck Water Works on a new water main crossing the Merrimack River to connect residents in the town of Litchfield with a water supply from the town of Merrimack. The water supply of more than 360 Litchfield homes had been found to be contaminated by PFAS. Shown are two cranes used in installation of the subaqueous pipe interconnecting the Merrimack and Litchfield water distribution systems.

U.S. Rep. Chris Pappas,D-1stDist., recently met with the leadership of the New Hampshire Good Roads Association to discuss the INVEST in America Act, which would provide more than $1.3 billion in New Hampshire’s infrastructure, with $1.2 billion for road projects and an estimated $130 million for transit – a 30% increase in federal funding for the state.

Concord Hospital will be cutting the ceremonial ribbon on Monday, June 29, to open a new wing at its Memorial Medical Office Building. The Memorial Medical Office Building West will be home to nine Concord Hospital and Concord Hospital Medical Group practices, the Orthopaedic Surgery Center in partnership with Concord Orthopaedics and Concord Eye Surgery, in partnership with Concord Ophthalmology Associates. Practices will move into the new space in June and July. Many practice names have also changed. The new wing was designed by LaVallee Brensinger Architects and constructed by Harvey Construction.

Brady Sullivan Properties has donated $500 toward the purchase of masks for the Johnson Family Community Mask Giveaway, spearheaded by Manchester native Angela Daneault and her siblings Randy and Kevin Johnson, whose father Rene Johnson died of Covid-19 in May at Catholic Medical Center

Consulting engineering firm CHA Consulting Inc.has acquired Mansfield, Conn.-based CME Associates Inc. CHA, which has a footprint in New Hampshire, Connecticut, Massachusetts and Rhode Island, is adding some 70 employees to its staff, including staffers at CME’s office in Nashua.

John Forti, executive director of Bedrock Gardens, a regional resource for horticultural education and agritourism in Lee, has won a 2020 Award of Excellence from National Garden Clubs Inc. Forti is also a regional governor and biodiversity specialist for Slow Food USA and previously worked as director of historic landscapes at Strawbery Banke Museum in Portsmouth.

The Belknap Economic Development Council has added two new members to its board of directors: Jennifer Anderson, deputy director of the Laconia Motorcycle Week Association and a professor of psychology at Plymouth State University and Lakes Region Community College; and Jodie Gallant, a business strategist and coach for JMG Business Strategy. Chris Walkley of Bank of New Hampshire will serve as chairman of the 2020 board. Other officers of the organization are Andrew Pike, Opechee Construction, vice chair, Allison Ambrose, Wescott Law, secretary, and Brian Bozak, Franklin Savings Bank, treasurer.

Jacob Woodard has joined TFMoran as a structural engineer after working as an intern for the company in 2019.