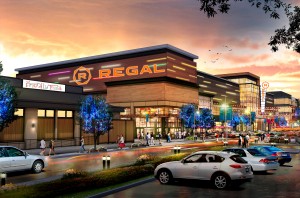 Regal Cinemas has signed a lease agreement to open an 11-screen movie theater with up to 1,800 seats at the Market and Main development in Bedford. The theater – the first cinema in Bedford – will be part of Market and Main’s second phase, which includes dining, retail shopping and a proposal for 200 luxury apartments. Developer Encore Commercial said the theater will be constructed on the second level of one of two five-story buildings that will both include retail stores on the lower level and proposed apartments on the upper levels.

Caleb Chinburg, a student at Oyster River High School in Durham, was recently presented with the $20,000, four-year Allen D. Berg CMiC Memorial Scholarship for his post-secondary education and training in civil engineering. He received the scholarship from the ACE Mentor Program after coming out in a national competition. The ACE Mentor Program is a national after-school program designed to encourage high school students to pursue careers in the architecture, construction and engineering industry. Chinburg will be attending the University of New Hampshire College of Engineering and Physical Sciences.

A project involving reconstruction of an earthen dam to preserve the waters of Turning Mill Pond — the most prominent of the nine mill ponds that the Shakers built in the early 19th century – has been completed at Canterbury Shaker Village. The reconstruction project was engineered by Milone and McBroom of Bedford, with additional time donated by engineer Eric Teale. Andrews Construction of Campton carried out the work.