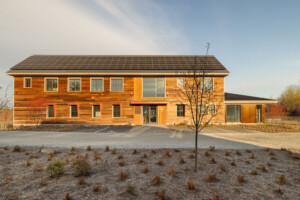 Chapman Construction/Design, a construction management firm in Newton, Mass., recently completed construction of a two-story 7,744-square-foot wood-frame building that will be the headquarters of the Southeast Land Trust of New Hampshire in Epping. The fossil fuel-free building was constructed by using sustainable practices and operates at the highest building performance standards, Chapman said. Others on the project team included Bruss Project Management of Concord, Sheldon Pennoyer Architects of Concord, Altus Engineering of Portsmouth and Design Day Mechanicals of New Ipswich.

An affordable housing development with up to 160 units is being discussed for the 5-acre former Sherburne School property in Portsmouth. The 17,000-square-foot Sherburne School, which used to be a neighborhood elementary school, is now home to the Robert Lister Academy, the city’s alternative high school. School officials have already voted to move the academy to the Community Campus property, which the city purchased in 2022, when a renovation is finished there, Seacoast Online reported..

The project, proposed by the Portsmouth Housing Authority, could include anywhere from 80 to 160 units, Executive Director Craig Welch told the City Council last Thursday. If the city and the Housing Authority reach a partnership agreement, the new housing will be “permanently affordable,” Welch said.

Welch described the discussed development as “a mixed-use type of village.” Welch said he has had discussions with leaders of local social service agencies Gather and Haven about being part of the village redevelopment.

Claira Pirozzi Monier, former executive director of New Hampshire Housing, will serve as honorary chair of the 31st annual Historic Preservation Awards to be held May 23 at Saint Anselm College, the Manchester Historic Associationannounced. Monier serves on the board of Amoskeag Industries and is a 2021 recipient of the Business and Industry Association’s Lifetime Achievement Award.