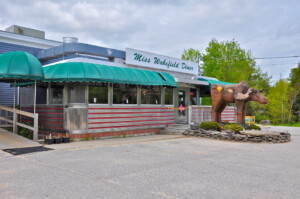 SVN|Masiello has begun brokering the iconic Miss Wakefield Diner & Gracie’s General Store, with developable land abutting White Mountain Highway in the Sanbornville section of Wakefield. The diner, one of only 22 operational diners manufactured by the Jerry O’Mahoney Diner Company. originated in 1949 in Hudson, N.Y., as Pat and Bob’s Diner ran until their retirement in 1968. The diner was then refurbished and made its way to Wakefield in the White Mountains. The surrounding parcels are also for sale as a package of 51.82 contiguous acres of land.

Independent boutique hotel operator Hay Creek Hotels of Exeter is part of an investment team seeking to purchase Longfellows Hotel & Restaurant on Union Avenue in Saratoga Springs, N.Y.. According to a report in Albany Business Journal, Hay Creek has been interested in purchasing the nine-acre, 50-room hotel and conference center for several years and wants to renovate the property and operate it as a boutique hotel with a restaurant and spa. Hay Creek is working on renovations with Balzer & Tuck Architecture, The LA Group Landscape Architecture & Engineering and Bonacio Construction of Saratoga Springs. Bonacio Construction also will have an equity stake in the project, the newspaper reported.

The sale of a 26,000-square-foot industrial/flex building with 8,000 square feet of office space at 4 Tinkham Road in Derry has been sold to Wrap City. Hugo Overdeput of Colliers’ Manchester office, procured the buyer, G&P Holdings LLC. According to the Rockingham County Registry of Deeds, the sale price was $2.4 million. Overdeput said that Wrap City, which has several retail locations, will use the site to manufacture its potato chips on a larger scale.

Twelve businesses from across the state helped the Society for the Protection of NH Forests reach the 2022 goal for the NH Community Development Finance Authority Tax Credit Program. The Forest Society was awarded $300,000 in tax credits through the CDFA Tax Credit Program earlier in the year to support renovation of the Carriage Barn at The Rocks as a new program and event center. The renovation will retain the historic exterior of the building and convert the interior into a net-zero energy efficient structure featuring geothermal and solar photovoltaic systems. The Rocks is a 1,400-acre property that serves as the organization’s northern New Hampshire campus. Making the contributions were: Badger Peabody & Smith Realty; Grappone Management Company Inc.; Lumbard and Kellner LLC; Mascoma Bank; Meredith Village Savings Bank; Merrimack County Savings Bank; Milestone Engineering and Construction; Nathan Wechsler & Company; Northway Bank; ReVision Energy; Union Bank; and Woodsville Guaranty Savings Bank.

Kelly Untiet has been named the new director of development and community relations at Concord-based CATCH Neighborhood Housing. Untiet, who has held roles in a variety of organizations in the government, nonprofit and for-profit sectors, most recently was community engagement manager with Unite Us in NH, a coordinated care network of health and social service providers, and administrator of the Office of Social and Emotional Wellness at the NH Department of Education. She currently serves as vice president of the New Futures board of directors.