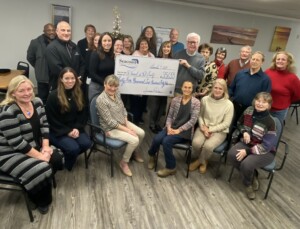 The Seacoast Board of Realtors recently donated $35,655 to St. Vincent de Paul of Hampton at a Community Outreach Committee Lunch on Dec. 7. The gift comes from the Seacoast Board’s 2022 fundraising efforts.

ApprenticeshipNH – a workforce program of the Community College System of New Hampshire – and White Mountains Community College have partnered with Capone Iron Corporation North Woods in Berlin to create welder/fitter pathways for adults and youth. The Welder/Fitter Registered Apprenticeship and Pre-Apprenticeship programs use ApprenticeshipNH’s “earn while you learn” model to prepare the next generation of welders/fitters to enhance the region’s infrastructure. High school students, at least 17 years old, interested in exploring the profession can enter the pre-apprenticeship pathway towards paid and unpaid internship opportunities that provide high school credit. Students who continue to the Registered Apprenticeship program can earn paid internship hours toward on-the-job training.

The town of Bow has announce that Karri Makinen has been selected to serve as its new community development director. She most recently served as Community Development Program manager for the town of Salem.

Lakes Region Community Developers was recently awarded a $20,000 grant by the TD Charitable Foundation to support its Affordable Rental Housing Program, which aims to create housing opportunities for people of low income and to empower them to achieve economic security.

The 20,000-square-foot residential and retail 51 Elm Street project in Lakeport section of Laconia is in its final stages of construction, according to developer Scott Everett. The project is built by general contractor Bonnette, Page and Stone and architect Stewart Associates. Expected to open in the spring of 2023, the building will include condominiums with views of Lake Opechee and retail businesses, including plans for an ice cream shop, café and pub and remote working hubs.

Tim Braseth has joined the Colliers team in its Portsmouth office. Braseth recently returned to New Hampshire after 18 years in from Los Angeles, where he spent the last 18 years in real estate, including with his companies ArtCraft Homes and ArtCraft Development, through which he bought, renovated and resold luxury properties. He also engaged in commercial development.

115 Daniel Webster Highway in Nashua has been sold to SANRA LLC, which plans to convert the former Bar Harbor Bank branch into a dental practice, according to Mark Prolman of Prolman Realty, which represented the seller. The buyer was represented by CARR and The Bean Group. Acquisition and Construction Financing was provided by Enterprise Bank. According to the Hillsborough County Registry of Deeds, the sale price was $905,000.

Granite Commercial Real Estate, Nashua, has announced the sale of 30 Pond Street in Nashua, a 6,040-square-foot industrial building with 20-foot ceiling, a drive-in bay and municipal services. James Prieto, director of real estate for Granite Commercial, represented the seller in the transaction.

Tom Dickson of Stebbins Commercial Properties has announced the sale of a 5,300-square-fot office condo at 175 Lincoln Street in Manchester. Dickson represented the seller, Manchester MCC Carrier Holdings LLC, and RE/MAX Bayside represented the buyer in the transaction. According to the Hillsborough County Registry of Deeds the sale price was $578,000.