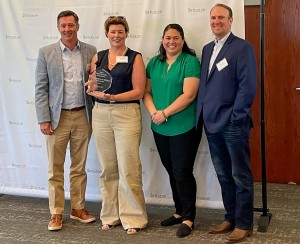 Among the winners of Plan NH’s Merit Awards of Excellence was The Factory on Willow, a former shoe factory turned into residences and commercial space. Shown are, from left, Preston Hunter of Eckman Construction, which built the project, owner Liz Hitchcock; Mariana Beer of Factory on Willow; and Adam Wagner of Market Square Architects. Other winners of the awards – which recognize outstanding projects that incorporate good planning, design or development and have had a positive impact on their communities, were: Visions Green Street in Lebanon, led by MA+KE Architects; Meredith Public Library addition and renovations, led by Milestone Construction; and the Lebanon Downtown Tunnel Project in Lebanon, led by VHB.

The NH Community Development Finance Authority has awarded $5 million in tax credits to projects throughout New Hampshire, including several initiatives aimed at increasing access to housing at revitalizing downtowns and historic structures.

Among the notable projects receiving grants were:

Julia Bowman, who is currently is currently studying environmental engineering at the University of New Hampshire, has joined TFMoran Inc. as a stormwater engineering intern for the summer. She has previous work experience as an undergraduate research assistant at UNH, creating control charts for southern New Hampshire towns to monitor chemicals in drinking water.

Decco Inc. in Nashua was the process piping contractor on CRISPR Therapeutics’ new manufacturing facility in Framingham, Mass., which recently was recognized by the International Society of Pharmaceutical Engineering as its Facility of the Year for its innovative design of the facility.