Pan Am Railways goes up for sale 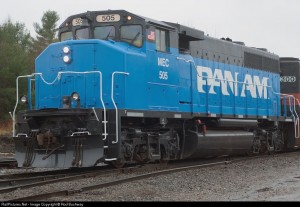 Pan Am Railways, the largest regional railroad in North America and operator of 1,700 miles of track in the Northeast, including 121 in New Hampshire, is for sale, Trains Industry Newsletter reported this week.

The report quotes Anthony Hatch, an industry analyst, to say, “I would expect that everyone is going to be interested in it,” noting that financial firms have taken growing interest in regional and shortline railroads, which has led to rising valuations. Pan Am Railways (PAR) has been profitable since it began in 1981.

Neither PAR nor the Bank of Montreal, said to be handling the transaction, responded to requests for comment.

Likely buyers reportedly include the Canadian National Railway and Canadian Pacific Railway as well as several shoreline railroads, among them St. Lawrence and Atlantic Line, which stretches from Portland to the Vermont/Quebec border and includes 52 miles in New Hampshire.

Shelley Winters, administrator of the Bureau of Rails and Transit of the New Hampshire Department of Transportation, said that she was not aware that Pan Am was for sale and could not comment beyond saying that once a sale closed the bureau would enter a partnership with the new owner.

Headquartered in Billerica, Mass., Pan Am Railways is a privately held company owned by Timothy Mellon, heir to the Mellon family fortune, and other investors. It provides freight service in Massachusetts, New York, Connecticut, Maine and Vermont as well as New Hampshire. Its rails connect to the Canadian National Railway, Canadian Pacific Railway, CSX and Norfolk Southern Railway as well as 20 other regional and shortline systems.

Pan Am Systems, the holding company that owns Pan Am Railways, is based in Portsmouth, NH.

In New Hampshire Pan Am owns or operates five railway lines. The Pan Am Railways Main Line runs 35 miles between Plaistow and Rollinsford, carrying the Amtrak Downeaster between Boston and Portland with stops in Exeter, Durham and Dover. The New Hampshire Main Line stretches more than 40 miles from Nashua to Concord and carries three-quarters of all freight (by weight) reaching the state by rail. The 12-mile Hillsboro Branch, known as “the Hillsboro Running Track,” connects Nashua and Wilton and to the state-owned line, operated by the Milford-Bennington Railroad that extends the service 18 miles to Bennington.

Pan Am holds haulage rights on the 394 miles of the Connecticut River Line between the Canadian border and New London, Conn., which includes 24 miles of track in New Hampshire between Walpole and Cornish.

Pan Am originated in 1977 when Mellon, now 78, partnered with David Fink, a former executive with Penn Central, with an eye to acquiring railroads. They formed GTI, a holding company, and purchased the Maine Central Railroad and Boston & Maine in 1983.

In 1998, GTI bought the brand Pan American World Airways –all that remained after the famed airline’s bankruptcy – and renamed itself Pan Am Systems and operated a regional air carrier at Pease International Tradeport in Portsmouth until 2004.