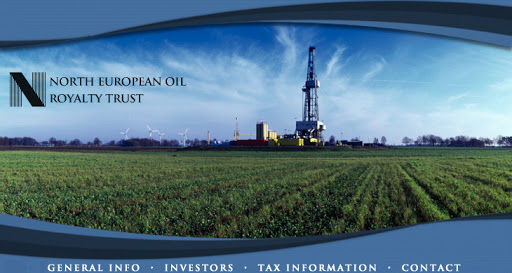 There aren’t many publicly traded companies based in New Hampshire, and those that are are relatively small. But they don’t get much smaller than the North European Oil Royalty Trust, listed as NRT on the New York Stock Exchange and now officially located in Keene.

The company was formed in 1975 as a successor of the North European Oil Corp. which was incorporated in 1957. The royalty rights date back to the 1930s. The money now primarily comes from natural gas, fracked by ExxonMobil Corp. and the Royal Dutch/Shell Group of Companies.

NRT takes no active part in all that.  It just gets a percentage of the proceeds, (about $4 million in fiscal year 2020, which ended last October) which are deposited in DeutscheBank in euros and then converted to U.S. dollars to be distributed to the shareholders.

The company was originally based in New Jersey, but in 2019 it officially moved to Keene.

“It’s just kind of happenstance,” said John R. Van Kirk, CEO, chief financial officer and managing director, who despite all his titles answered his company’s phone on the first ring. “We didn’t have a need to stay in New Jersey, so we set up a virtual office up here.”

Van Kirk, a Dartmouth graduate, has other roots in the Granite State.  His wife got her first job here, and he ran a general store in Munsonville (an unincorporated town in Nelson, not far from Keene) for a decade, and his kids went to school here.

Meanwhile, he gradually worked his way up and took over his father’s role in the family business – the trust – by 1990. The company has been filing reports with the Securities and Exchange Commission at least dating back to 1995, though it maintains it really doesn’t have to. And as Van Kirk spent more and more time here, his second home became his first.

Van Kirk was compensated $135,960 in fiscal 2020, nearly all salary. The trust also reimbursed him $4,000 for that virtual office. There are also six board members who received a total of more than $100,000 in fees.  The trust has one other employee, and administrator who is still based in New Jersey.

According to financial filings, the trust’s revenue and profits have fallen with the price of gas during the economic downtown. Last year, it received $4 million, less than half the amount it got in 2019, and its net income was $3.3 million, or 36 cents per unit (they shares are known in trusts). Some 32 cents of that went out to unitholders.  In 2019, it was 82 cents.

Revenue continued to plummet in the first fiscal quarter, which ended Jan. 31. Royalty income was $283,000, a 72% decline from the same quarter last year, and net income was $111,842, 85% of last year’s. But the stock price has been doing well as of late. It has been trading at about $4 a unit, over a dollar more than its price in December.