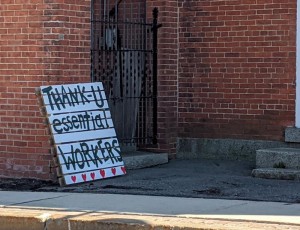 Some essential workers in New Hampshire, especially those who come into contact with many people each day, say they’ve been sidelined in the vaccine distribution process.

Nathan Soucy, a waiter at Firefly American Bistro in Manchester, says he is at higher risk of contracting and spreading Covid, given the nature of his job. “When a table seats, you know, sits down, I bring them water, they’re allowed to take their mask off from that point on, and the only time they have to put a mask on is when they get up from their table.”

Soucy and some of his co-workers collaborated on petition to Gov. Chris Sununu, asking for restaurant workers to be included in phase 2b.

When asked about any priority for this group at a press conference last Thursday, Sununu said that priority is based on risk level alone, and that age should be the top determinant.

The state has prioritized some groups of people by profession, like teachers and childcare workers, who are beginning to get vaccinated today, in group 2a.

Frances Bader, a grocery worker in Bedford, feels similar frustration to Soucy. Bader estimates that she comes into contact with over 100 people each day. And she says, not all of them are wearing their masks.

“You know, they pull them down to talk and they don’t distance themselves, they really come right up to you. You know, we back away. But, there’s only so, so far we can go”

Earlier this month, Bader received a text message from her employer that a Covid-19 case had been confirmed at her location.

While Bader herself will soon be able to register for the vaccine, as she falls into 2b’s 50+ group, she says, for many of her coworkers, that’s simply not the case.

Wesley Smith, who works in private security, like Bader, has also seen cases in his workplace. And that makes him worried for the health of his family.

“My wife and I just had our son last August. He was born right in the thick of it [the pandemic], and even before that, but definitely since that day, every day I go to work, I wonder if I’m going to cross paths with that one employee who might have been exposed.”

A study from researchers at the University of California-San Francisco, suggests that workers in non-medical essential fields, like food workers, are at greater risk of dying from Covid-19 than the average worker. The study looked at excess deaths among working-age Californians from March to October 2020, and compared the death rates by occupation to previous years.

In its guidance for states, the CDC recommends prioritizing essential workers, placing Postal Service workers and grocery store workers among those in its 1b recommendations. New Hampshire, like many other states, has opted for a more age based system of distribution.