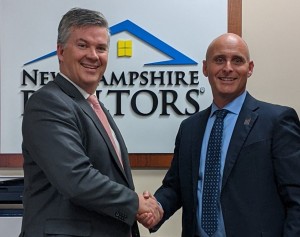 Bob Quinn, who for 11 years has served as the New Hampshire Association of Realtors’ government affairs director, has been named the organization’s new CEO.

Quinn, 53, has shepherded the organization since May following the death of former CEO Paul Griffin,

“Bob’s work during a uniquely challenging time has been remarkable, He was essentially asked to step in and guide a 7,000-member organization through a global crisis, amidst the loss of a beloved and successful leader,” said NHAR President Marc Drapeau in announcing the appointment. Drapeau was part of a seven-member search committee that pared down the list of applicants to three before a final vote of the organization’s board of directors to hire Quinn.

As the organization’s vice president of government affairs, Quinn played a key role in NHAR’s successful bid to have real estate deemed an essential service by Gov. Chris Sununu during the initial days of New Hampshire’s stay-at-home Home Order. A little more than a month later, he found himself in the role of Acting CEO as the staff and association mourned the loss of Griffin.

“He had to lead during a time of both emotional and business upheaval,” Drapeau said. “It cannot be overstated how masterfully he has done it.”

During the two decades prior to his work at NHAR, the state’s largest trade association, Quinn served in various political and governmental affairs roles in the state of New Hampshire, and he said he looks forward to putting his breadth of experience to good use.

“As the real estate industry evolves, the Association needs to continue our engagement in public policy matters affecting real estate more than ever,” he said. “We will continue to elevate our business standards through education and training while underscoring to consumers the advantages of transacting business with Realtors.”

Quinn said his readiness is in large measure due to the groundwork laid by his predecessor, mentor and friend.

“Paul set a very high bar,” he said, “and I look forward to building upon the solid foundation he created.”