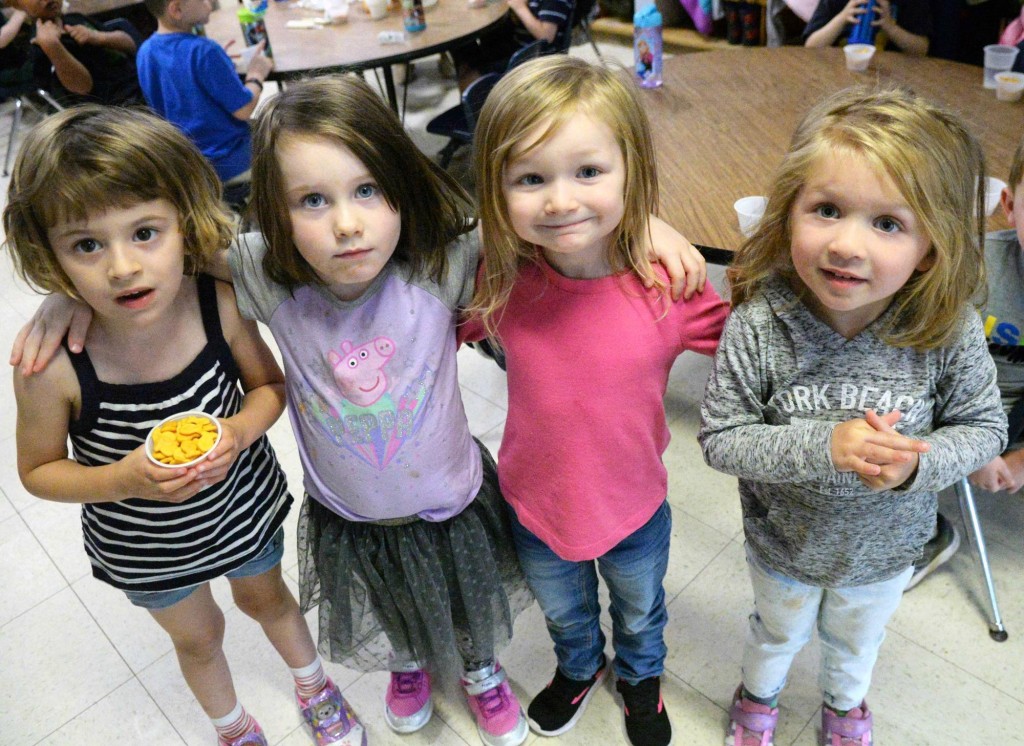 According to a first-ever comprehensive ranking of U.S. counties released by nonprofit Save the Children, New Hampshire ranks third in the country for states whose children have the most protected childhoods.

But across the state’s 10 counties, there are stark disparities.
Save the Children’s report, “The Land of Inopportunity: Closing the Childhood Equity Gap for America’s Kids,” provides both bird’s-eye and granular views of child well-being across the country through both state and county-level data.

Some child welfare officials in the Granite State worry that conditions caused by the coronavirus could set the state back in its progress. Federal, state and local dollars will be required to reinvest in an entire generation of children, they say.

“This pandemic has really brought to light how vulnerable kids are,” said Mary Lou Beaver, Waypoint’s director of the Children’s Place and Parent Education Center in Concord. “I think we’re going to see some serious issues we’re going to have to deal with as we start to come out of this, as far as kids go.”

But the unprecedented crisis has also brought opportunities for more collaboration across organizations, and services increasing access that perhaps wouldn’t have happened otherwise, like virtual meetings with direct service providers.

“I have not seen this level of excitement, movement and willingness to change how we’re doing business in a way that impacts families, and having families at the table, too,” said Donnalee Lozeau, executive director of Southern New Hampshire Services and former mayor of Nashua. 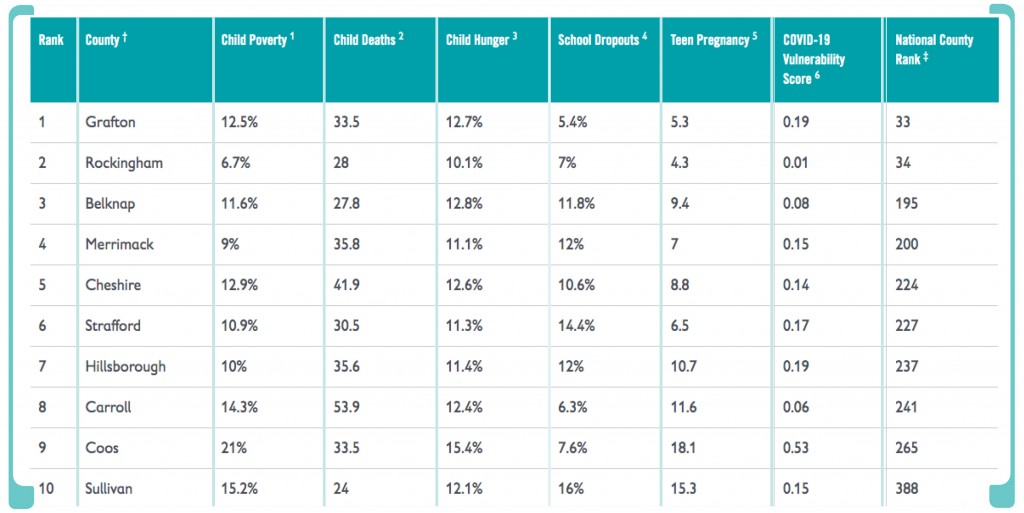 According to the Save the Children report, New Hampshire has a 10.1.% child poverty rate, but county rankings range from the top 50 in the country down to the 300s.

Nikki Gillette, report researcher for Save the Children, said the report shows all across the country there are “pockets of deprivation” next to counties where children are doing very well, demonstrating a zip code can be a determinant for a child’s future. State level data can hide those huge inequities — which exist even within counties — she said; the reason Save the Children decided to take a closer look.

In all but seven states, rural childhood poverty rates exceed those of urban childhood poverty, the report says, and the same rings true in the Granite State. The highest rates of poverty are in Sullivan, Coos and Carroll counties.

In the state-level rankings, New Hampshire is No. 1 in the nation for lowest infant death rate, and despite disparities demonstrated in the report, Save the Children pegs New Hampshire as having a lesser child equity gap than other states.

At the county level, Carroll County has the highest numbers reflecting child mortality, at 53.9 deaths among children under age 18 per 100,000 population.

Sullivan County has an alarming 16% high school dropout rate, and Coos County has the most teen pregnancies per 1,000 females ages 15 to 19.
Grafton and Rockingham counties rank 33rd and 34th as the best counties for children nationwide, respectively.

A good ranking should not cloak the struggling and vulnerable children who exist across the state, she said, and more work needs to be done to lift them up. However, O’Neill said, New Hampshire is “certainly on its way to building out really good child-centric programs and services.”

She added: “Even now in the pandemic, the governor is really committed to keep moving forward on the investment that he’s making in child welfare,” O’Neill said. “The heart of that is building out community-based services.”

O’Neill said amid the virus outbreak, the state has been able to develop a remote and virtual infrastructure for its child welfare system, and “we’re already seeing services in parts of the state we haven’t had before.” She noted a remote juvenile diversion program in the North Country as an example.

Joelyn Drennan, senior program manager at the New Hampshire Children’s Trust, said the virtual services appearing during the virus outbreak have been able to bridge disparities and gaps that
existed prior, especially those in rural areas.

“If you can do a home visit virtually, you can reach so many more families,” Drennan said. “I really hope that is something that will stay. It’s a very economical way to expand services. A lot of families disengage in services because of transportation issues, for example. But if the appointment comes to them, they’re more likely to engage and we’re more likely to see improvements in outcomes.”

Lozeau of Southern New Hampshire Services said New Hampshire’s child protection and well-being system is going through a “transformative time,” citing an investment by state officials and agencies she hasn’t seen before.

“We have an opportunity right now because of some of the barriers that have been moved in the system to help families in a very different way,” she said.

But, said Joy Barrett, CEO of the Granite State Children’s Alliance, which oversees child advocacy centers around the state, while New Hampshire’s latest ranking is a “congratulatory moment signaling that most children are well in New Hampshire, the reality is there are many that are not. We need to leverage what makes us rank well to help all of the kids here,” she said.

Beaver, of the Children’s Place and Parent Education Center in Concord, is concerned about the pandemic’s impacts on childcare and early childhood education.

“Trauma can have an impact for an entire life span and for many of the younger kids, especially those we serve, these are the formative years when the most brain growth is taking place,” she said.

Beaver expects child care centers — some of which may not survive the crisis — will have to bring in behavioral and mental health consults for both children and families when buildings reopen.

“Two months or more in quarantine is going to take its toll,” she said. “I really am concerned about what’s going on behind closed doors that we’re not aware of.”

The state is going to have to see a major investment in childcare and early childhood education, Beaver said.

“For every dollar you invest, you get a return of seven or more dollars,” Beaver said. “If we support children and their families as a whole unit as they grow, those kids have a really much better chance of becoming better productive members of society and adding to the economy. It just makes sense.”

Hadley Barndollar is a 2020 Inequality in America press fellow for Save the Children. This article is being shared by partners in the Granite State News Collaborative. For more information, visit collaborativenh.org.