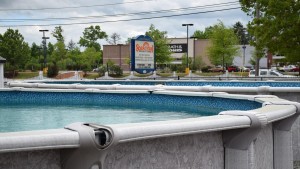 Memorial Day weekend is typically a big weekend for pool store sales, but this year store owners were scrambling to keep up with the high demand created by the New Hampshire’s Covid-19 stay-at-home order.

“Sales have increased dramatically, especially since the weather has changed,” said Peter White, owner of Aquatime Pools & Spas in Hudson. “Since the beginning of May the phone has been ringing off the hook. So there is going to be the seasonal load and the additional pandemic load, so it’s going to be a real strain on the supply chain.”

Jeff Huberty, one of the owners of Empire Pools and Spas, with locations in Concord and Manchester, said in his 28 years in the business he has never seen anything like this. “From the minute we open the doors in the morning till we close at night we are mobbed,” he said.

“The last two weeks we’ve been busier than any other Memorial Day that we’ve had. Everybody is at home. They don’t know when they are going to be able to go anywhere. And they want a pool.”

Empire Pools and Spas sells above-ground pools from a supplier in Canada and another in New York, Manchester sales manager Nicole Soterion said. The stores sell between 120 and 160 pools from fall through spring, Huberty said

“I don’t know if we will see more numbers than last year,” because they are completely sold out, she said. “We can’t sell anymore right now; everything we had in stock or could get through our distributors is gone. … We will be up, but if we were able to get our hands on more pools it would be astronomical.”

“The manufacturers cannot supply us with any more pools this year,” Huberty said.

“It happened in a surge,” Soterion said. “Suddenly everybody wanted a pool. It just happened so fast.”

The Canadian supplier remains closed and the New York supplier is only beginning to reopen after a nine-week hiatus, they said.

“Right now, there’s a glimmer of hope that we might be able to get some pools in July,” Huberty said.

“This is my eighth year here and it is the craziest year that we have ever had,” he said. “Even when we were closed back in April we were slammed with online orders and phone orders. Our storefront was closed. As soon as we opened, the doors all hell broke loose,” he said.

Based on state guidelines they have to keep the number of customers in the store to under 30 at a time, he said. “And we have to have someone watching that count.”

“It’s a great year for our business. It’s just crazy for us cause we can have only so many people in the store at a time,” he said. The store has even set up a new voice message system to take all the phone calls that have been coming in.

Soterion said some buyers told them that they had been thinking about buying an above-ground pool for years. “For some people this (the pandemic) is the kick in the pants that they have always needed, so why not now that they don’t have an option to go anywhere?”

Stephanie Parker, a receptionist at Aquatime Pools & Spas, said since she started at the store two years ago she has always fielded a certain number of calls from people asking if they install above-ground pools, which they don’t. But in the past two months, she has received more phone calls asking about above-ground pools than in the two years before that.

Aquatime is strictly an in-ground service and installation business, owner White said. Concrete or vinyl, to be specific, and they range in price from $30,000 to $80,000. Concrete pools are on the costlier side and can take up to 6 to 8 weeks to install. A vinyl pool is the cheaper quicker option, taking two to three weeks to install.

With the mad rush to get a pool in their backyard, most customers are asking for the vinyl option, White said, however, steel panels for the frames are now in short supply, mainly because much of the manufacturing of panels is done in New York and New Jersey, “and we are feeling supplier issues with the liners,” he said.

White said it’s not so much a question of how many pools are being ordered as that everyone is coming in at the same time to order them. The planning process at Aquatime usually begins in January and February, he said. Many of their projects begin in the fall and are completed in early spring, he said.