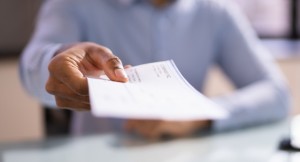 Paper paychecks for employees are in New Hampshire to stay, at least for now, if the outgoing House Labor Committee has anything to say about it.

The committee voted unanimously Thursday to reject Senate Bill 209, which would allow employers to pay employees through a debit card, whether their employees want one or not. The panel instead wants to stick with current law, which requires that employers pay by check if their workers insist on it.

“If you want a check, you can get a check,” said committee Chair Will Infantine, R-Manchester, who was quoting a fellow legislator, and then added, “The problem I have are the fees. If I have to pay a dollar every time you want to use the card – well, every dollar counts.”

One financial institution had previously assured committee members that its current practice is to let someone make a one-time withdrawal of cash without charging a fee, but that language wasn’t in the bill.

Even if it was, those who would use the card – those without bank accounts that can accept direct deposit – won’t be the most sophisticated consumer, said Brian Sullivan, D-Grantham. “They are in dire straits” and might not realize the fees involved.

The solution, he said, is to leave things alone, and allow the employee to choose. “I have no problem with a payroll card if the employee wants it,” he added.

“One of the issues is the insecurity of the reliability of the payments, added Rep Joshua Adjutant, D-Enfield. “If you have a third party, the actual process of getting their attention if your payment is short and late becomes untraceable. It’s far more complicated than to go to your employer to get another check.”

“We didn’t hear one employer come in and say it’s major issue. I would err on the side of caution. If this was big enough, the Business & Industry Association would come here, saying, ‘We need this to be competitive.’”

The committee voted, 12-0, that the bill not be revived. Of course, that doesn’t mean it won’t be.