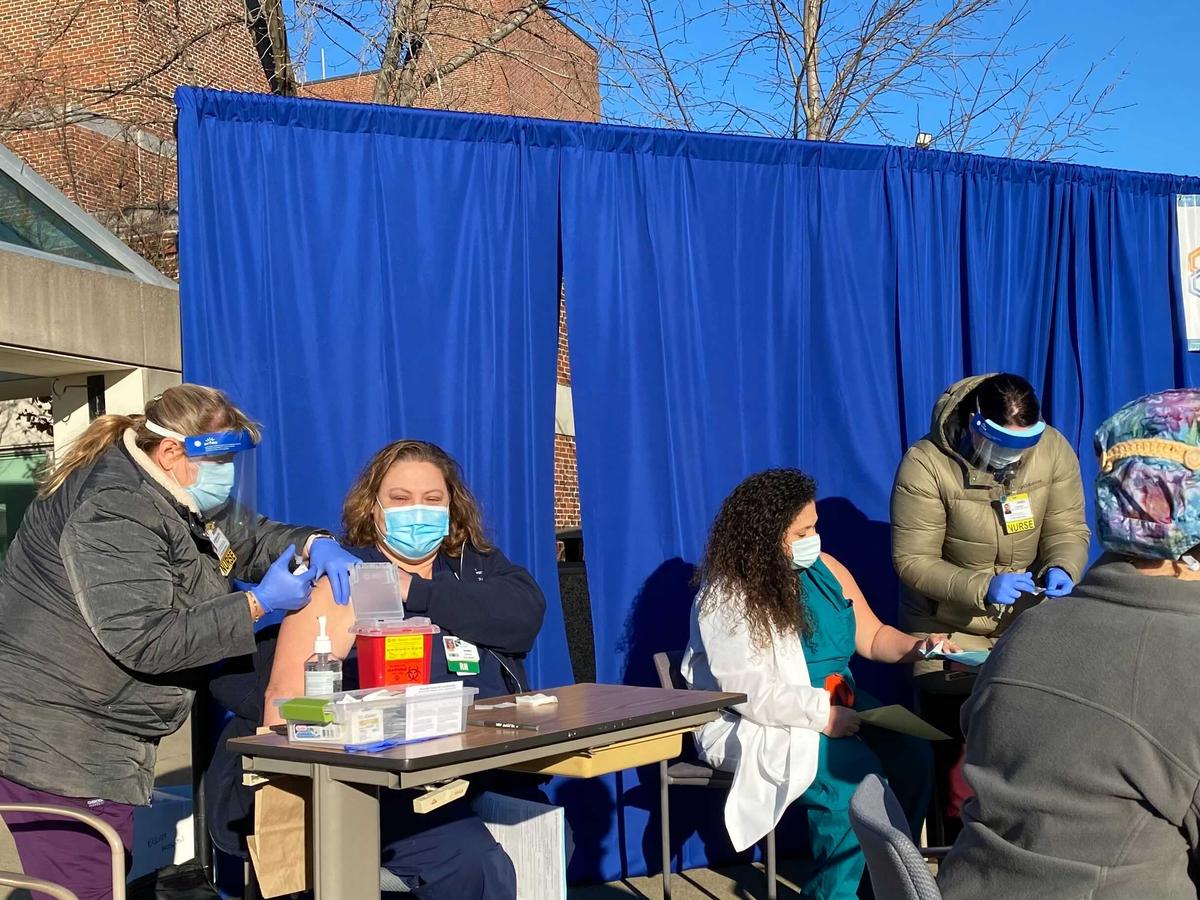 As mask mandates end at schools, employees return to the office and infections and hospitalization numbers drop, many people have a renewed sense of optimism that the worst of the pandemic is behind us.

But while Covid-19 restrictions ease and the country returns to some semblance of normalcy, health professionals stress the importance of continuing vaccination efforts.

In his State of the Union address this month, President Biden said the United States will continue to combat the virus, and stressed the effectiveness of vaccines.

“We will never give up on vaccinating more Americans,” he said.

But after more than two years of the pandemic, some people are starting to tune out public health messages about the virus, and health professionals are trying to change their messaging and strategies to continue to reach the vaccine hesitant.

“What we noticed within the community is, honestly, people seem fatigued of hearing about Covid,” said Iliana Barreto, a community organizer with the Granite State Organizing Project who coordinates the group’s vaccine efforts at the Centro Latino de Hospitalidad drop-in center, which provides referrals and other services twice a week at Manchester’s Catholic parish St. Anne-St. Augustin. “It’s been two years, going on three years now, and they just feel like they just want to get over it. Unfortunately, that’s not the reality we’re living.”

Barreto’s GSOP and other community and health organizations are now shifting their vaccination efforts to a micro level, knocking on doors and trying to go where the people are. They say the most successful efforts now are those that focus on building trust and answering questions one-on-one.

Bobbie Bagley, director of the Nashua Division of Public Health and Community Services, said her department is continuing to send people out into the community to do on-site vaccinations, including at places like barbershops and soup kitchens.

“We still find that access is an issue,” Bagley said, and some people are unable to drive to a mass vaccination site or even a local clinic.

“So you really have to go to where the people are,” she said. Bagley said her team has even reached people simply out on the street near the soup kitchens during their pop-up vaccine clinics.

“We’re just doing what we call ‘shaking the bushes,’” she said.

About 58 percent of New Hampshire residents are fully vaccinated against Covid-19, compared to roughly 65 percent of the country.

Bagley said her department has stopped referring to those who are unvaccinated as vaccine-hesitant.

“We just call it cautiousness,” she said. “Because people really are cautious because of their own fears.”

Bagley said some of the people who are coming in for their first doses now were simply waiting to see how others fared after vaccination.

“People just really wanted to see what happened with other people,” she said.

According to experimental survey results released by the U.S. Census Bureau in December, nearly 50 percent of unvaccinated adults said they were concerned about possible side effects. The survey, which allowed respondents to choose more than one answer, showed that about 28 percent of unvaccinated adults also wanted to wait and see if it was safe. About 42 percent said they don’t trust the vaccine.

The Granite State Organizing Project, a faith-based community organizing coalition that works for social change for traditionally disenfranchised communities, has been involved in vaccination efforts throughout the state. Barreto, the coordinator of the GSOP’s Centro Latino de Hospitalidad drop-in center, said a lot of the organization’s work on vaccines continues to revolve around debunking misinformation.

Sarah Jane Knoy, executive director of the GSOP, said many people still have concerns about the false claim that the vaccine impacts fertility.

According to the CDC, there is currently no evidence that any of the Covid-19 vaccines, or any other vaccines, cause fertility problems in women or men.

Knoy said the group has been going door to door in the neighborhoods they serve, asking people if they have questions about the vaccines or would consider getting vaccinated if they aren’t. The work is labor-intensive, but they employ volunteers and paid community outreach workers, who speak the native languages of the people they are trying to reach.

Betsy Burtis, chief officer for Integrated Health Services at Amoskeag Health in Manchester, said some of the lingering concerns their providers hear continue to revolve around misinformation about the safety of vaccines for pregnant women, and whether getting the vaccine can lead to losing a pregnancy.

“So we’ve tried to do a lot of education around that,” Burtis said.

According to the CDC, there is growing evidence that Covid-19 vaccination during pregnancy is safe and effective. Additionally, those who are pregnant are more likely to get very sick from Covid-19, and if they are infected while pregnant they have an increased risk of complications that can affect the pregnancy and baby. The CDC recommends vaccination for people who are pregnant or breastfeeding.

At the heart of most of these renewed vaccination campaigns is building trust.

Edward Shanshala II, CEO of Ammonoosuc Community Health Services, said they are working on a strategy that he referred to as “street medicine.” Ammonoosuc serves several communities in Northern New Hampshire, including Littleton, Franconia and Warren.

It’s about connecting people with similar lived experiences – such as similar hesitancies and concerns about the vaccine – with each other. Ammonoosuc is doing this through using community health workers “to carry knowledge to those communities,” Shanshala said.

“In my experience, the people who are really good at conveying that information are people with lived experience,” he said.

Shanshala gave a personal example of needing a surgical procedure, and despite knowing the data and having all the medical information, he was still hesitant. He was only able to get over his hesitancy after talking to close friends who had had the same procedure about their experience.

“Surgery is a scary thing,” he said. “And for some people, vaccinations are scary. Being able to talk to people who are like them, who come from similar backgrounds, similar experiences – it’s a different conversation than someone you don’t know.”

In addition to the community health workers, the health center is trying to identify members of the community who can share their stories in short videos that can be widely distributed.

“You know, ‘Do you have a friend or family member who’s been vaccine-hesitant? I was vaccine hesitant. Let me tell you my story.’ People can see themselves in those local stories,” he said.

Shanshala said the health center has had success with this strategy in encouraging colorectal cancer screenings, diabetes care and women’s health screenings.

The GSOP has also been training community members – in classes of 10 – on how to address questions about vaccines.

Knoy said people are sometimes still concerned, but they get the vaccine because they trust the messenger.

“I remember at one of our first clinics, one of the community members … after he got his first shot, he said to me, ‘OK, well now you’ll take care of me if I grow a tail,’” Knoy said. “And a lot of people said those kinds of things to us. And to me, that means they really were worried, but they came because they knew Iliana, they knew me and so they came and trusted us.”

Sally Kraft, vice president of Population Health at Dartmouth-Hitchcock, said they are starting to look ahead to when Covid-19 becomes endemic, or reaches a stage where it is continuously circulating in the community at low levels.

“The changes in guidelines are an indicator that people are doing their job and keeping us as safe as possible,” she said.

Kraft said it is essential that people stay engaged and continue to follow public health recommendations as they come out.

“It is critically important at this point in time that everyone maintain their vaccines up to date, and that includes a booster if you’re eligible for a booster,” she said.