Annual online fundraiser has raised over $8.7 million in six years 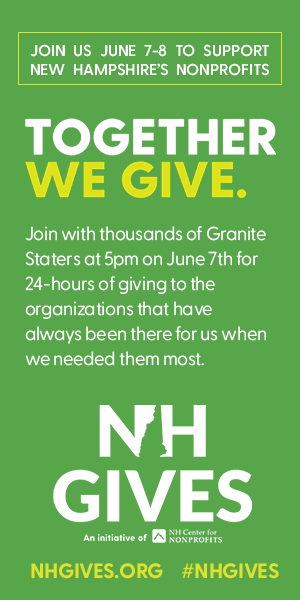 When Hussain Amiri was resettled to New Hampshire from Afghanistan as a refugee in 2016, things were difficult. He struggled to learn English at Concord High School. After school he biked to work so that he could save for a car to drive his brothers and mother.

Now, Amiri is 24 and in his third-year at Plymouth State University, where he’s studying computer science. He’s completing that degree while also working full-time as a case manager at Building Community in New Hampshire, a Manchester-based nonprofit that helps settle refugees in the Granite State. Amiri works mostly with the 175 Afghans who came to New Hampshire after the United States withdrew from their country last year and the Taliban regained control.

“I have been in the same situation as they are right now,” Amiri said.

About half of the funding for Amiri’s position was raised through NH Gives, an annual online fundraising event organized by the NH Center for Nonprofits. Last year, more than 14,000 people donated to nearly 600 nonprofits, infusing $3.8 million in charitable donations into the state, according to Kathleen Reardon, CEO of the center. This year, NH Gives will take place June 7-8. About 500 nonprofits are participating. (The Granite State News Collaborative is a media partner for NH Gives and will be a participant.)

Unlike grant funding, which is often very specific in what it can be used for, the donations raised through NH Gives can be used for anything. That’s instrumental to helping organizations like Building Community in New Hampshire adjust on the fly.

“Everything has strings attached, but donations from NH Gives are unrestricted,” said Richard A. Minard, executive director of Building Community in New Hampshire.

Last year, the organization raised $38,000 through NH Gives. That represented about 15 percent of the operating budget.

At first, the organization had no specific plans for the funds. But in August, when the U.S. withdrew from Afghanistan, it became clear that the organization would need a case worker who spoke the languages and understood the challenges of Afghani refugees.

“The funding we got gave us the confidence to hire someone full-time,” said Minard.

Finding Amiri, with his personal experience, was icing on the cake, he said. This year, Building Community in New Hampshire will again be participating in NH Gives. They’re anticipating more Ukrainian refugees, so the organization is considering using donations to hire a caseworker who speaks Ukrainian.

Over the past six years, NH Gives has raised $8.7 million for New Hampshire-based nonprofits, said Reardon. However, the day is about more than just the final number. The NH Center for Nonprofits provides participating nonprofits with education about fundraising, securing matching funds and engaging with potential donors.

That’s especially important for small nonprofits like the Nottingham-based NH Fiddle Ensemble, which is participating in NH Gives for the first time this year.

“We’re learning about fundraising techniques and how best to share our story,” said Ellen Carlson, executive director of the ensemble. “It’s more of a learning opportunity this year, because there is so much involved.”

Although the ensemble has been performing around the state for nearly 13 years, it formerly operated as a limited liability corporation. This year it switched to nonprofit status, which Carlson believes will make the organization more sustainable long term. However, that comes with a steep learning curve.

“We have a lot of people who can help fundraise, but it’s getting that process going,” Carlson said.

Board members have been attending training sessions hosted by the NH Center for Nonprofits in hopes of maximizing contributions this year and strengthening fundraising in the future.

Cindee Alice Tanuma, executive director of Community Caregivers of Greater Derry and The Loaner’s Closet for Durable Medical Equipment, attends every webinar that the NH Center for Nonprofits holds. By participating in NH Gives for the past four years, she’s learned about hashtags, co-branding and the importance of personalized communication with donors.

“We are given the tools to be successful,” she said.

The online fundraiser gives the organization more control than they would have over other fundraising options like ticketed events or weather-dependent fundraisers, Tanuma said. Her organization hopes to raise $25,000, or about 7 percent of their operating budget this year.

“It is a labor-intensive fundraiser, but so worth the effort when you see how many people believe in the work you do each day,” said Tanuma.

By organizing a statewide giving campaign over just 24 hours, the NH Center for Nonprofits is able to maximize interest and engagement, said Reardon. There’s a sense of excitement as people donate on social media and share their contributions and their thoughts on the organizations that are important to them.

Nonprofits compete for prizes, including one for the organization that has the most donors. Engaging new donors helps build community around nonprofits, increasing sustainability, Reardon said. Even small donations of $5 or $10 are amplified through matching funds and the sheer amount that is donated through NH Gives, she said.

“Days like NH Gives shows that everyone can be a philanthropist,” she said. “You don’t have to be the 1 percent.”