Question: Why would SolarCity, the nation’s largest residential solar energy installer, enter the New Hampshire market, a state where the House of Representatives recently voted to raid the $50 million Renewable Energy Fund to balance the budget?

Answer: The clean tech industry is now almost strong enough to stand on its own feet, as companies and private investments start to fill the void caused by the withdrawal of public funds.

In fact, the next generation of support for the industry aims to take advantage of this development, depending very little on public money. These programs tend to be more flexible and holistic, often combining renewables and energy efficiency that save money over time. 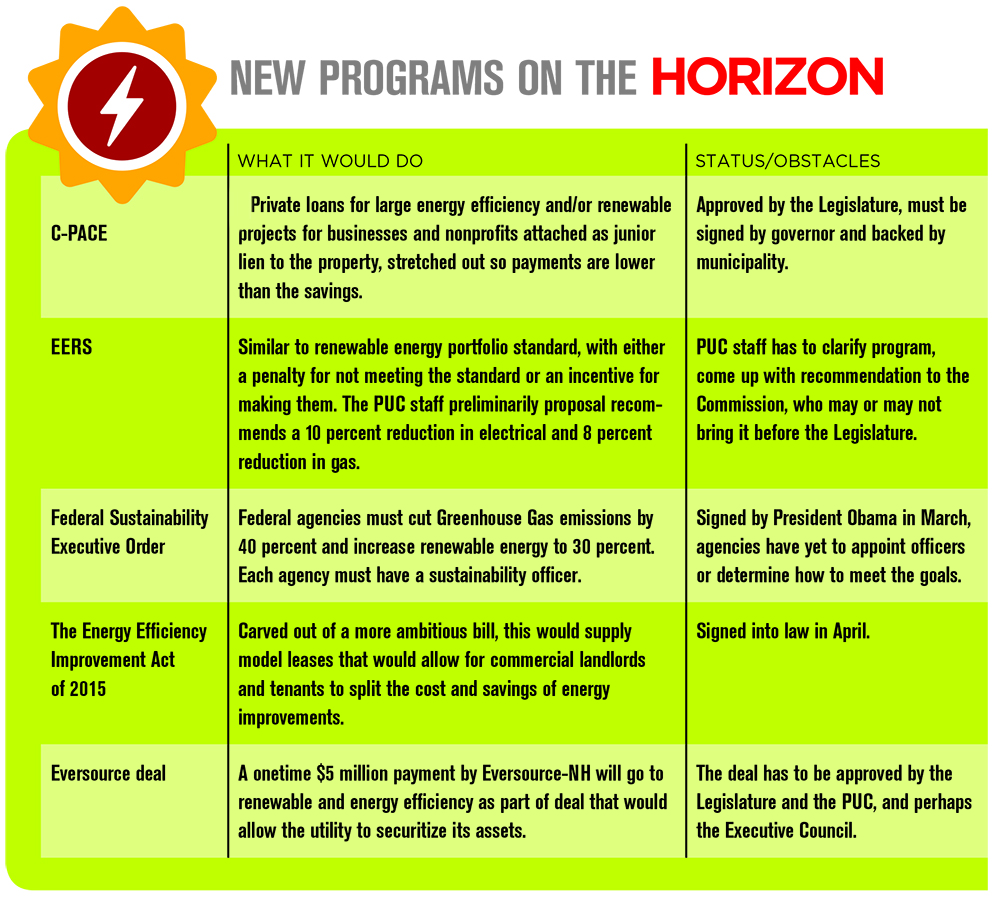 The focus is now on how to facilitate private investment. For instance, there is the revised C-PACE (Commercial Property Assessed Clean Energy) program that just cleared the Legislature and the Energy Efficiency Resource Standard, or EERS, now quietly being developed by the Public Utilities Commission. In addition, a new federal energy-efficiency bill sponsored by U.S. Sen. Jeanne Shaheen has been signed into law by President Obama.

“The industry is at a crossroads,” said Kate Epsen, executive director of the NH Sustainable Energy Association. “There is a lot of momentum, costs are coming down, businesses are ramping up. Policies can hinder that or encourage that.”

The raid of the state’s Renewable Energy Fund – paid into by utilities that do not meet the state’s renewable energy portfolio standards – will hinder the industry in New Hampshire, said Epsen, but it “is going to continue regionally and nationally.”

As the industry flexes its political muscle, to fight that raid, the sun seems to be setting on such public funds just as new private funding is rising.

C-PACE is probably the best example of that. House Bill 205, passed by the Legislature at the end of April, would allow private energy loans for businesses and nonprofits to be attached to the property and be collected as a municipal assessment. The loans would be stretched out so payments would be lower than the energy savings.

The bill, which was approved by bipartisan voice votes in both chambers, awaits Gov. Maggie Hassan’s signature. (The governor’s spokesman said that while the program has the “potential to boost energy efficiency and conservation” the governor “will review the measure closely as it makes its way to her desk.”)

A version of that law has been on the books for five years, but because it allowed municipalities to do the lending, leery lawmakers instituted caps that made the program unworkable.

C-PACE moved forward most successfully in Connecticut, which seeded its program in 2013 with $40 million deposited in a “Green Bank.” It has approved some 90 projects totaling about $70 million and closed on some $30 million in loans that were sold off to private investors, replenishing the bank with private funds for other projects, said Brian McCarter, executive director of Sustainable Real Estate Solutions (SRES), which works with contractors and certifies the energy savings.

The New Hampshire program would rely only on “unlimited private financing,” said Laura Richardson, president of the Concord-based Jordan Institute, which is spearheading the program.

“I have been approached by eight different companies, investment groups and banks,” Richardson said. “If half of them are lying, we are still covering the New Hampshire portfolio.” 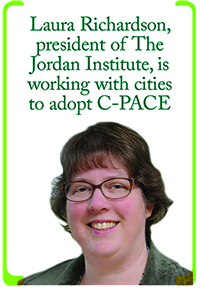 The portfolio could be enormous. There are 39,000 commercial properties in the state, but there are also 234 municipalities.

Richardson is working with cities this year, putting off the town meeting circuit until 2016. Two are ready to move, and there are enough potential projects to approach a handful of others, Richardson said. The institute’s partner is SRES, which plans to market it though contractors.

SRES and the Jordan Institute’s investment arm, Resilient Buildings Group, also will have to certify that the savings from the upgrades must be greater than the monthly loan payments without any up-front costs, to satisfy the borrower and the lender.

One possible lender – named in the NH C-PACE literature as a partner – is Hannon Armstrong Sustainable Infrastructure Capital Inc., a 25-year-old energy investment firm that went public in 2013. Since then, it has made some $1.5 billion in investments.

Investors find the program attractive because municipalities collect the payments as a separate property assessment, then hand them over to a nonprofit, such as the New Hampshire Community Development Finance Authority, which would service the loan. The CDFA already has its own $6 million revolving clean tech fund, dating back to 2009, seeded with stimulus money from the last recession and Regional Greenhouse Gas Initiative funds.

Those loan payments are coming back, giving the fund about $2 million in liquid capital for either direct loans – at 2 percent – or loan guarantees, enabling banks or other investors to lower interest rates.

The renewable aspect of C-PACE loans will be particularly helpful to the wood pellet boiler industry, which could be severely hurt if the Senate and governor agree to raid the Renewable Energy Fund rebate program. That’s particularly important to businesses located in areas that are “off-pipe” to natural gas, “which is pretty much everything north and west of Tilton,” said CDFA’s Executive Director Taylor Caswell.

While C-PACE is on the brink of becoming a reality, the Energy Efficiency Resource Standard is still in the design phase.

The Public Utilities Commission recently published its “straw” proposal in March, and the timeline for finalizing it hasn’t been set, nor has it been decided whether to seek approval of the Legislature.

EERS could be similar to the renewable energy standards. Utilities would have to meet a certain standard, but it would be a percentage of energy saved, as opposed to a percentage of renewables in a utility’s portfolio.

Currently, utilities save a little more than a half a percent though their CORE programs, mainly paid by a $30-million-a-year ratepayer surcharge. The preliminary standard put forward by the PUC staff would build on that, raising the savings to 9.76 percent from electric ratepayers and 7.63 percent from gas ratepayers by 2025.

How to achieve that is the question. The PUC staff did consider the possibility of doubling ratepayer surcharges, but questioned its “political acceptability.” It could also charge utilities a penalty if they didn’t meet the standard. That’s how the Renewable Energy Fund got its money.

It could pay performance incentives to those that meet the standards, though such incentives usually come out of the surcharges. Finally, there is the possibility of allowing utilities to “decouple” their allowable return from the amount of energy sold, but this might mean a higher bill for customers that don’t reduce their usage.

Thus, the interest in the private sector.

That includes programs like C-PACE as well as Warehouse for Energy Efficiency Loans, or WHEEL, a national loan program that standardizes energy-efficiency loans and sells them on the secondary market. 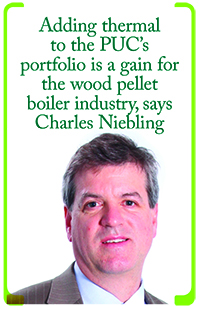 If the PUC does go to the Legislature – and the staff recommendation is that they should – it’s unclear how they would react.

“There are costs and benefits,” said Sen. Jeb Bradley, the Republican Senate majority leader from Wolfeboro. “We are hearing from some people that this could be quite expensive, but some states have implemented it better than others.”

“This is the cheapest resource they could pay for,” said Epsen. “The mindset is they don’t build efficiency, but infrastructure. Infrastructure is included in the costs. When it’s efficiency, they break it out as a separate item and point to it and say, ‘See how much it costs you?’”

Two federal programs on the horizon also come with no public money attached.

There is no money attached to the order, which should save the federal government $19 billion. But agency heads may be reluctant to carve money out of this year’s budget to achieve future savings. That’s where the sustainability officer comes in.

The immediate impact on New Hampshire however will be limited. While the federal government owns some 360,000 buildings, in New Hampshire it has about 100 post offices and the U.S. General Services Administration lists about 50 other federal buildings with about 800,000 square feet.

Besides, while big players like SolarCity have done business with the federal government for years, many locally based contractors are intimidated by federal procurement regulations.

Perhaps the biggest takeaway will be by the wood pellet boiler industry, which lobbied and got a provision to include thermal heating technology in the mix of renewables, said Charles Niebling, partner and principal at Antrim-based Innovative Natural Resource Solutions. Previous orders just focused on electrical energy savings.

Niebling also backs a bill sponsored by the two U.S. senators from Maine, and backed by New Hampshire’s Shaheen, that would extend the 30 percent tax credit that goes to solar and wind investments to wood pellet boilers.

“That would have a very significant effect,” said Niebling.

But the bill, the Biomass Thermal Utilization Act of 2013, has languished in Congress for the last two years. And the renewable energy credit is expected to go down to 10 percent at the end of 2016.

Another bill sponsored by Shaheen, the Energy Savings and Industrial Competitiveness Act of 2014, also has languished, though it was reintroduced last month. The bill provides some public money – such as $200 million for model building codes.

But other measures that are part of the larger Energy Efficiency Improvement Act of 2015 – signed into law at the end of April – have no money attached.

One would direct the U.S. Department of Energy to come up with a model lease to split costs and savings of energy improvements between commercial tenants and landlords. Another would develop a Tenant Star program that will recognize the energy-saving efforts of commercial tenants, similar to the EnergyStar program that recognizes building owners. There’s also an exemption for large on-demand electric heat pumps from new efficiency regulations, since such pumps are necessary for a smart grid to function better.

But new public money is not really what the industry wants, Epsen said.

“The idea behind public money is to create a stable environment to attract private capital,” she said. “When rules suddenly change, investors hold back. But if you have declining incentives over time, they are more likely to fund these projects.”