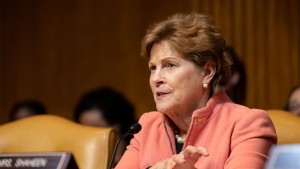 Several small businesses and nonprofits across New Hampshire told U.S. Sen. Jeanne Shaheen that the Paycheck Protection Program has provided much needed short–term relief to keep employees on the payroll in the midst of the Covid-19 pandemic, but they also had a complaints about the program including uncertainty about loan forgiveness.

Dave and Melissa Levin, owners of Mad River Coffee House in Campton, told Shaheen in a conference call earlier this week that the process to obtain an $82,000 loan went smoothly because of a strong relationship with their bank, but Dave Levin said he is reluctant to spend the money without fully understanding the requirements for forgiveness.

Under the PPP, small businesses can receive 1% U.S. Small Business Administration loans through their bank. To be forgivable, 75% of the money must be spent on payroll over an eight-week period and the rest on mortgage interest, rent or utilities.

Levin said that in the loan closing, “nothing regarding forgiveness was in writing. I signed paperwork that I got a loan and I was going to pay it back in two years. I would like to use it for hazard pay, bonus pay, but without rules for forgiveness I don’t feel safe using the money so I am using as little as possible.”

Levin said if he has to pay the loan back in full over two years it will cost him about $4,600 a month. “That is a crushing amount and even if it were half that, it is still crushing.”

As a seasonal business, Levin said the requirement he maintain staffing levels as one of the conditions for loan forgiveness is simply not reasonable.

“There is no proof that come July 1 I’m going to need the same staffing we had in the middle of the White Mountains ski season,” Levin said. “

He also said the full-time equivalent employee ratio under the loan was “irrelevant,” due to the seasonal nature of his business.

“I feel the rules for forgiveness should be straightforward and simple,” Levin said. “You use 75% for payroll, and all full-time equivalent ratios should be removed.”

Levin’s comments were echoed by Adria Bagshaw, owner of WH Bagshaw, a Nashua-based manufacturer of pins.

“There is no proof, senator, that the loan will be forgiven,” Bagshaw told Shaheen. “There is nothing in the loan guarantee we signed.”

“It is just hearsay,” added Levin.

The PPP has a number of documentation requirements that must be provided with the forgiveness application, which is not part of the original loan. These include verifying the number of full-time equivalent employees on the payroll and their pay rates for the periods used to verify staffing and pay requirements.

Other required documents include unemployment insurance filings, any retirement and health insurance contributions and eligible interest, rent and utility payments. Only 25% of the loan can be used for those items.

According to the online bookkeeping service Bench.com, if forgiveness is denied the only recourse is to perhaps provide additional documentation to have the request reevaluated, otherwise interest will accrue at 1% over the next two years as the loan is repaid.

Bagshaw also asked if the loan will be taxable if it is forgiven and whether a business can include an employee who is asked to come back to work but declines.

“There is a lot of speculation, uncertainty and confusion for us around how the forgiveness will work,” Bagshaw said.

Shaheen said she was sympathetic to both Levin and Bagshaw and promised to bring their concerns back to Washington.

“I think the issue is not the intent (of forgiveness) but reassurance and guidance,” Shaheen said.

The hour-long conference call was a wide-ranging discussion of the experience of businesses and nonprofits that have successfully applied for a PPP loan. Shaheen said she was looking for input she could take to Washington to make improvements.

“My hope is I can learn what is good and changes you would like to see,” Shaheen said. “There are challenges that have arisen with the program,” she acknowledged. “It has not worked exactly as intended and some of that is a result of how quickly it came together.”

Kurt Steelman, president of Steelman Production Services in Keene, which provides labor to the entertainment industry in New Hampshire and other states, said he was “really grateful” for his PPP loan but also worried about the payback and forgiveness provisions.

With social distancing here to stay for a while, Steelman said no one anticipates events with 10,000 or more patrons happening for at least a year or maybe 18 months, which means he will have no income.

“We need flexibility on forgiveness or repayment of the loan,” Steelman said.

Shaheen quickly agreed and said she has heard that same sentiment expressed by many others.

“We really need to think about extending time on payback if it (the loan) can’t be taken as a grant (forgiveness). That needs to be on the table.”

In response to several participants who said their money for eight weeks of payroll will run out in June, Shaheen said a fourth stimulus package will likely be forthcoming but said it is too early to say what type of assistance will be included.

Another issue that was mentioned by several participants was the difficulty getting people to come back to work when they get paid more with state and federal unemployment benefits.

“It is hard when you have a dishwasher making $300 a week and says, ‘Why do I want to come back to work when I’m getting $700 a week?’” said Jeff Brechbuhl, owner and innkeeper of Colby Hill Inn in Henniker.

Shaheen said the $600 federal unemployment stipend is for people who are laid off, not those who voluntarily decide not to work.