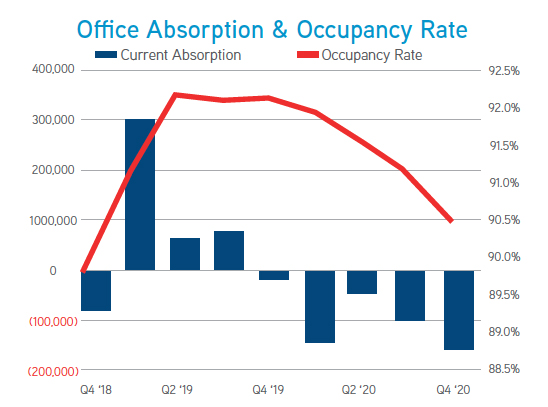 Editor’s note: This article has been corrected. The proposed Hudson Logistics Center is still in the approval process.

When it comes to commercial real estate in New Hampshire, the outlook for different sectors is mixed, with the industrial market still looking strong, but demand for office space unsettled.

That’s the verdict from Colliers International, which has released its Q4 Market Insight report.

The report points out that, at the start of 2020, occupancy rates in New Hampshire’s office and industrial markets were strong – above 92%. After a year of the pandemic, the occupancy rates remain 90% – a “slightly reassuring figure,” according to the report – but there are still big questions remaining about what the lingering effects of the Covid-19 pandemic will be on commercial real estate.

According to the report, as New Hampshire moves further from the initial pandemic-related shutdown, it’s still unclear the direction the office market will take as many companies wait to make decisions on their future office plans and needs as work-from-home edges closer to becoming a permanent fixture for employers and employees.

But, according to Colliers’ New Hampshire Office Market Insight report, although the drop in the occupancy rate may not be as significant as expected, “more space is likely to hit the market in 2021.”

And, despite the falling occupancy rate, rents rose by 28 cents per square-foot – up 1.5% — ending the year at $19.01. Much of the increase is due to new, higher-end space hitting the market, according to the report.

In the industrial market, things look a little better, according to the New Hampshire Industrial Market Insight report.

The market remained strong, ending the year with an occupancy rate of 95.6% after rising over the fourth quarter. And overall rents finished at $7.05 per square-foot, a 51-cent rise year-over-year.

The report notes that, amid the favorable market for owners, some build-to-suit projects were announced during the quarter, which points to an uptick in industrial construction next year. This includes the controversial Hudson Logistics Center, a massive project proposed at the site of the former Green Meadow Golf Club in Hudson, and the Granite Woods Commerce Center project that is seeking approvals in Hooksett.

In addition, The Flatley Company broke ground on its Nashua Micro-Tech Center, which will include three one-story buildings totaling 38,000 square feet that is looking to attract life science and biotech companies.

According to the report, “the industrial market occupancy rate will remain high in 2021 and as new projects are being proposed, space could be occupied quickly.”