But state’s transportation infrastructure once again gets a failing grade 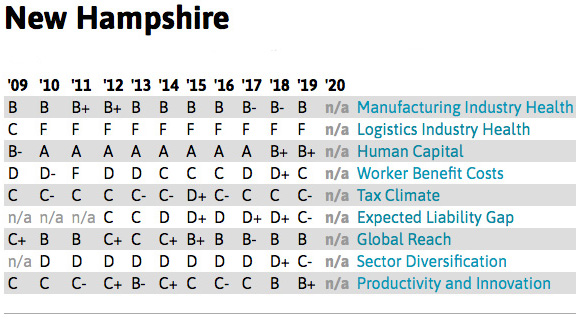 New Hampshire remains in the top 15 states when it comes to the overall health of its manufacturing sector, but there’s still lots of room for improvement, according to Ball State University’s 2019 Manufacturing and Logistics Report.

New Hampshire received a B grade for the overall health of its manufacturing sector. It was given an A for in the human capital category but an F for the health of its logistics infrastructure.

The A for human capital is an improvement from last year, when the state received a B+. In assessing that category, Ball State researchers include rankings of educational attainment at the high school and collegiate levels, the first-year retention rate of adults in community and technical colleges, the number of associate degrees awarded annually on a per capita basis and the share of adults enrolled in adult basic education.

On the other end of the spectrum, the state’s F in logistics was the 10thyear in a row it received a failing grade in that category. To measure the health of a state’s logistics industry, the researchers look at the share of total logistics industry income as a share of total state income and the employment per capita. They also include commodity flows data by both rail and road by measuring infrastructure spending as the per capita expenditure on highway construction.

The state also received grades of C- for tax climate (which is based on data on corporate taxes, income and sales and use taxes, property and unemployment insurance tax data); C- for expected fiscal liability (which looks at data on unfunded liability per capita and percentage of GDP, average benefits and bond rankings); B for global reach (which looks at export-related measures of per capita exported manufacturing goods, growth of manufacturing exports and foreign direct investment); and a B+ for productivity and innovation.

The state also received a C- for worker benefit costs and

and a D for sector diversification. Both of those grades were lower than the year before.