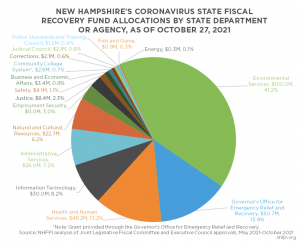 With a third of the state’s nearly $1 billion of federal pandemic money allocated, drinking water and wastewater projects have received the biggest slice of funding as of October, according to a recent analysis by the New Hampshire Fiscal Policy Institute.

Of the $360 million in American Rescue Plan Act funding approved so far, over 40 percent of it has gone to water infrastructure. That’s $150 million for drinking water and wastewater projects, which will be managed by the Department of Environmental Services. The amount is more than three times what has gone to the Department of Health and Human Services, which had received about $48 million, or 13.2 percent of funds for managing the pandemic public health response, as of October.

Some $50 million given to DES was approved in June, with some of it going toward the creation of seven temporary full-time jobs. Those jobs include a business administrator, accountant, civil engineer, two environmentalist positions, a sanitary engineer and a program manager. The additional $100 million was approved in October. Of the $150 million, around $134 million is set aside for grants and $10 million for loans for communities.

While the Department of Environmental Services has received the most money of any department, it’s still a fraction of the overall cost of upgrading and replacing water infrastructure in the state – which the department estimates would total roughly $1 billion. The state has been urging municipalities to apply for the funding, which has to be used by the end of 2026.

There are a wide range of water projects that are eligible, like replacing lead lines, installing new systems, or removing contaminants from drinking water.