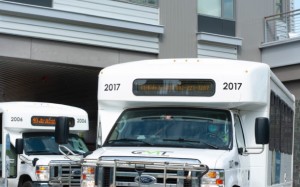 A MyRide bus passes through the Montpelier Transit Center in Montpelier, Vt., a community that has been using a microtransit service since January 2021. (Photo by Natalie Williams/VTDigger)

In downtown Montpelier, Vt., anyone needing a ride can open an app on their smartphone or place a phone call. A few minutes later, a vehicle shows up.

It’s not Uber or Lyft — those ride-sharing apps aren’t active in Montpelier — but the newest iteration of public transportation. The concept is called microtransit, and the specific program in Montpelier is known as MyRide “It’s kind of like Uber for public transportation,” said Jamie Smith, director of marketing and planning for Green Mountain Transit, which runs MyRide. “Users can [book] a trip that works on their schedule, versus the alternative: being beholden to a fixed-route schedule.”

Like ride-sharing services that are popular in cities but limited in much of New Hampshire, microtransit uses technology to facilitate rides on demand. MyRide utilizes technology from Via Transportation, a transit technology company based in New York City. Unlike Uber or Lyft, public microtransit often involves sharing space, as roughly two to five people headed in the same direction fit into each vehicle.

There’s little data on how widespread microtransit is, but anecdotal evidence and reporting indicate that it’s on the rise. It may be particularly impactful in rural settings, where sprawling country roads make fixed route bus service and other public transportation ineffective and expensive. About 25 percent of Via’s projects in the U.S. are in municipalities with a population of 50,000 people or fewer, according to spokesperson Sarah-Jessica Dilks.

The state of Maine has pointed to microtransit as an innovative transportation solution. Vermont just approved more than $2 million in annual funding to support six microtransit projects, according to Ross MacDonald, public transit program manager with the Vermont Agency of Transportation. And now, at least one region of New Hampshire is looking at implementing its own program.

The commission, which covers the Monadnock Region, is spending $42,000 to consult with Via, Mack said. That is part of a larger transportation feasibility study that has a total budget of $90,000.

Urban and suburban areas where many people live and work close together can implement traditional public transportation like bus routes and even subways. But these fixed-route services are problematic in rural settings, where people often live far from their doctors, shopping centers, schools, places of work and each other.

Yet “people in rural areas need to get to health care, jobs and the grocery store as much as people in urban areas,” said Amy Conrick, director of the National Center for Mobility Management.

This presents a host of problems. Eighty-seven percent of the most ineffective bus routes in the country are in rural areas, according to a Via analysis of information from the National Transportation Database. The inefficient routes are more expensive to operate.

Another challenge for rural transportation agencies is the first- and last-mile problem: getting people to and from established fixed-route transit stops to their ultimate destination. If people can’t navigate the first or last mile of a trip, they’re unlikely to use fixed-route services.

“It’s hard to make fixed-route work really well if you don’t have [population] density,” said Mack. “The bus can’t go willy-nilly all over the entire area that you want to cover.”

Montpelier tried that, allowing people to request deviations of up to three-quarters of a mile on fixed-route bus services. But that often resulted in buses that were operating behind schedule, said MacDonald.

Microtransit provides a potential solution. Since a microtransit program began in Gainesville, Ga., in 2020, the cost per ride on public transit has dropped by 20 percent, said Phillippa Lewis Moss, director of the Gainesville-Hall County Community Services Center. That’s a “phenomenal,” result for the small city of 43,000, a population about the same as Concord’s, she said.

Steve Workman looks forward to seeing the results of the Southwest Region Planning Commission’s study. Microtransit has potential in New Hampshire, especially as a way to confront the first and last mile problem, said Workman, director of Transport New Hampshire, an organization that advocates for transportation systems within the state, and a member of the leadership team of the State Coordinating Council for Community Transportation. Although microtransit doesn’t always pick someone up at their doorstep, the ride can get much closer to traveler’s departure and arrival points than fixed-route service can.

“This concept is one we have to keep in our toolbox,” he said.

Many of the transportation options in rural regions are targeted toward people with limited options: the elderly, people with disabilities and those who can’t afford to maintain their own vehicle. The systems often aren’t designed for so-called choice riders: people, particularly younger individuals, who opt into public transportation for environmental, cost-savings or other reasons. That’s a shortcoming, said Mack.

“Public transit, if it’s designed well, is meant to be designed for anyone and everyone,” he said. “We’re trying to get away from this idea that it’s specialized transportation for certain populations.”

“I like to use the word ‘sexy,’ and my boss keeps telling me to stop using that,” she said. “But there’s something appealing to young people and non-traditional users.”

There’s been a “significant uptick” in people using microtransit who never would have taken a bus — including Gainesville’s mayor, said Lewis Moss.

“Before, we couldn’t convince people with vehicles to get out of their vehicles,” she said. “Now, it’s easy and it’s sexy.”

Montpelier has seen a similar, if not as pronounced, trend. As different segments of the population use the system, the momentum builds for attracting a more diverse set of passengers, said Christopher Damiani, senior transit planner at Green Mountain Transit.

“Having all the different types of passengers in one system creates a better awareness of public transit,” he said.

Proponents of microtransit recognize that it’s not an end-all solution for the problems that face public transit in rural areas.

“I have not seen a silver bullet to meet everyone’s transportation needs,” MacDonald said.

Microtransit, in general, is more expensive to operate than fixed-route service. Both Montpelier and Gainesville had challenges with riders who did not have a smartphone and therefore couldn’t use the app. In both cities, riders have the option to call to book a ride.

Then there’s the ever-present issue of balancing service area and wait times. Gainesville has expanded its program to cover more than 400 square miles in Hall County. That’s resulted in more access to the program, but longer wait times for rides, said Moss. Montpelier has had some issues with people booking multiple rides, then choosing the ride that was most convenient for them, resulting in no-shows, MacDonald said.

Another concern is providing rides across different geographic areas of the state, Workman said. Programs that are restricted to certain counties or regions might not be able to deliver riders where they need to go.

“Most of us live our lives without regard for the boundary lines,” he said.

The challenges even brush on the mundane, like how to help people get safely into vehicles on snow-covered rural roads without sidewalks, Mack said.

Then there’s the newness factor, which gives some people hesitation, Workman said. Microtransit relies on algorithms and technology that simply weren’t available in the public sector until the last few years. Still, Workman is watching closely to see how microtransit could be used to strengthen the public transportation networks in the Granite State.

“People see some challenges and aren’t ready to trumpet it as the final solution. But it’s part of a sustainable solution,” he said. “There’s definitely something here, that’s why I’m so curious to see what comes out of the Monadnock study.”

This article is being shared by partners in the Granite State News Collaborative as part of our Race and Equity Initiative. For more information, visit collaborativenh.org.