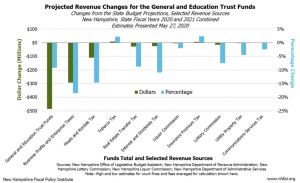 New Hampshire state agencies expect revenue collections to be more than $500 million less than planned through the middle of 2021, indicating key services for Granite Staters may face funding challenges without other supports.

Agency officials indicated the combined general fund and education trust fund collections may be about $486 million, or 9.2%, lower than originally planned for the entire state budget biennium. The expected reductions in revenue to these funds and the highway fund, caused by the impacts of the Covid-19 crisis, suggest additional revenue from the federal government or other sources will be required to avoid significant and consequential reductions to the current state budget.

The projections, presented to the House Ways and Means Committee on May 27, were generated by key state agencies that collect revenue. These agencies included the Department of Revenue Administration, the Liquor Commission and the Lottery Commission as well as the Department of Safety, which administers taxes on motor fuels and motor vehicle registration fees, and other agencies with smaller revenue streams.

These projections are subject to considerable uncertainty, but almost every agency provided a single dollar figure estimate, rather than a range of possible collections outcomes.

The most dramatic swings in projected revenues relative to previous plans came in the DRA’s forecasts for the state’s major tax revenue sources. These revenue sources are critical contributors to the general and education trust funds.

Five key sources are expected to come in significantly lower than planned: the business profits tax, the business enterprise tax, the meals and rentals tax, the real estate transfer tax and the interest and dividends tax.

The BPT and the BET, which are commonly filed and analyzed together, are projected to fall short of the expected revenues established by the state budget by $292.9 million, or 18.5%, over the biennium. The DRA projected the weakest receipts relative to plan would be in the months of May, July, August, and September in calendar year 2020, all of which would be more than a third less than planned. June is expected to only be 10 percent less than budgeted, due to some taxes due earlier in the year being deferred to June. However, the impact on business taxes is anticipated to continue. June 2021 receipts, which typically include significant quarterly estimate payments, fall 17% short of plan in the DRA’s forecast.

The DRA assumed meals and rentals tax receipts would recover more rapidly. With lows of 61% and 56% in May and June 2020 (meals and rentals tax receipts reflect economic activity in the month prior to collection), the DRA anticipates receipts will climb to be only two percent under plan in the month of June 2021. This upward trajectory in projected Meals and Rentals Tax revenue relative to the lowest levels experienced in the pandemic indicates the DRA expects a faster recovery in the economy than following the Great Recession of 2007 to 2009, which yielded relatively slow economic growth in New Hampshire for several years. Overall, the DRA estimates meals and rentals tax receipts will fall short of planned amounts by $110.6 million (14.6%) during the biennium.

The DRA anticipates real estate transfer tax revenues will bottom out in June (reflecting May activity) with receipts at 60% below planned amounts, and climb back quickly from July to October. However, the forecast has receipts remaining at least 5% below plan for every month of the rest of the biennium, totaling a loss relative to planned amounts of $27.9 million (8.8%).

Examining the impacts of the Great Recession and the stock market on interest and dividends tax receipts, the DRA projected total receipts for the biennium would be down $25.5 million (10.9%), despite a boost from deferred April payments in May and June of 2020. The DRA expected tobacco tax revenues would not be impacted by the Covid-19 crisis going forward beyond a slight decline in May 2020 after an increase in April, when companies appeared to be stocking up on cigarette box stamp purchases.

The Liquor Commission projected no revenue loss due specifically to the Covod-19 crisis, noting that while sales to bars and restaurants had dropped, sales at retail outlets were up significantly. The Lottery Commission estimated a loss of $15.8 million (7.5%), with noteworthy revenue declines in keno and sports betting partially counterbalanced by an increase in scratch ticket sales.

The DRA and Lottery Commission revenue estimates assume there will be no resurgence of the pandemic in the fall or winter of 2020, with normal economic activity resuming gradually.

Outside of the general and education trust funds, the Department of Safety projects the highway fund will fall short of the state’s planned revenue amounts by approximately $40.7 million (7.9%). Declines in revenue from the motor fuels tax, motor vehicle registration, and other fees are expected to contribute to this reduction. In the most recent two state budgets, surplus general fund dollars have been used to support the highway fund, suggesting that with reduced highway fund receipts and little realistic opportunity for general fund surplus revenues, transportation funding may be especially strained.

In total, these projected revenue declines suggest key services funded by the state budget are at serious risk. Recent investments made in mental health, child protection, support for individuals with disabilities and education funding targeted at communities with higher proportions of low-income children and lower property values are likely needed more now than when they were signed into law in 2019.

Expenditures budgeted for fiscal year 2020 have already been nearly completed, and the prospect of a 12% reduction in general and education trust fund revenues during fiscal year 2021 presents challenges to continued funding of budgeted services. This reduction is projected under a scenario that does not include the public health crisis becoming more acute again due to a possible resurgence of viral spread, which may result in further declines in economic activity and in revenue collections.

Phil Sletten is senior policy analyst at the New Hampshire Fiscal Policy Institute. This article is being shared by partners in The Granite state News Collaborative. For more information visit collaborativenh.org.