Companies look for, and find, new opportunities as Covid-19 spreads 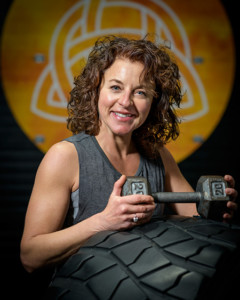 At Fortitude Health and Training in Manchester, the gym is live-streaming classes on Zoom, says owner Lisa Maria-Booth. ‘We had 200 people in the first two days and offer 14 classes a week. We’re sitting sweaty and happy.’ (Photo by John Hession)

Across New Hampshire, the scourge of the Covid-19 virus has taken a heavy toll on a wide variety of businesses, but at the same time created fresh opportunities for some and prompted others to refine their operations in ways that may enhance their futures.

Hardest hit have been the restaurants and bars ordered to close by Gov. Chris Sununu. Other businesses, providing personal services incompatible with social distancing, have followed suit.

She said hairdressing is not a necessity, and although some of her regular patrons called for appointments, “I closed down to be safe for myself, my family and my clients.” Brownell said that social distancing and hairdressing are a “bad fit” and “everybody’s health is most important.” Questioning why hairdressers and tattoo artists have not been ordered to close, she said “I’m very shocked.”

With like motives, Brooke Swanson also closed Salon 603 in Gilford. She explained that her husband works at Lakes Region General Hospital, and she could not risk exposing herself to the virus and placing him at risk as well.

“Closing won’t hurt me for two weeks,” she said, “and after that I will reevaluate.”

Like Brownell, she stressed that doing her part in preventing the spread of the virus was her foremost concern.

Although most retailers have continued to operate as the number of customers has dwindled, many have taken steps, especially expanding their use of e-commerce, to continue trading across the widening divide of social distancing.

At the Gilford Country Store, which stocks clothing and novelties evocative of the Lakes Region, Kathy Tognacci, who also operates outlets in Meredith and Wolfeboro, said “this is definitely tough.”

She said that she has closed her store to walk-in traffic and turned her energy to increasing online sales. Her inventory features the work of some 40 local and regional artisans, whose earnings have also dwindled with the slump in sales. And she regrets having to let go or reduce the hours of employees.

Tognacci said the only positive aspect of her situation was the timing of the dislocation.

“For us, March and April are down times,” she said, explaining that the bulk of her sales occur in the Christmas season and between May and October, when the population swells with seasonal residents. She said if the crisis stretches into the summer, “we’re in trouble, but there is nothing more I can do.” 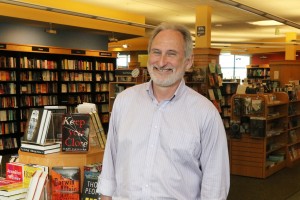 Michael Hermann, owner of Gibson’s Bookstore in Concord, says his store, closed to the public, is taking orders by phone and online and filling them by mail or offering curbside pickup. (Photo by Allegra Boverman)

Michael Hermann, owner of Gibson’s Bookstore in Concord, said after cutting his hours of business and the hours of his employees, he closed the store to the public. He said he applied to the New Hampshire Department of Employment Security to supplement the wages of employees through the WorkShare program, which provides unemployment compensation to those whose hours have been reduced by between 10 and 50 percent.

Hermann said the store is taking orders by phone and online and filling them by mail and offering curbside pickup.

“The virus has solved Concord’s parking problem for the time being,” he remarked, adding, “we’re doing between 50 and 100 mailings a day and seem less like a retail store than a distribution warehouse.

The American Booksellers Association provides a platform for booksellers to post their stock online, he said. “We’ve filled orders from Washington state, Texas and Massachusetts.”

At the Innisfree Bookstore in Meredith, Casey Gerken said she is following much the same strategy.

“We’re at Mill Falls Marketplace, which has shut down,” she said, “so no one is coming in.” She said she has tailored her shifts to limit the exposure of her employees and, like Gibson’s, is taking orders by phone and online. But, along with curbside pickup and mailing, Gerken has put a twist on the bookmobile by providing what she called “free front porch delivery” within a handful of zip codes.

In Manchester, Fortitude, a health club and fitness center, operated since 1990 by Lisa Maria-Booth, is like several similar facilities that have “reached outside the bricks and mortar” to provide virtual exercise regimens.

“We’re live-streaming classes with Zoom,” she said, explaining that members sign into the “meeting” through the app. “We had 200 people in the first two days and offer 14 classes a week,” Maria-Booth said. “We’re sitting sweaty and happy.”

Since the classes are “virtual,” she said anyone can join in, no matter where they are. “We’ve had a guy from Colorado and another from Rhode Island,” she said.

The service is free to members and available for a small fee to others.

Maria-Booth said she renamed the business “Fortitude” eight years ago and now has “reinvented” it, fulfilling the promise of the christening. The Covid-19 crisis “is my time to make sure the community remains healthy in mind, body and spirit,” she said.

Streaming live has enabled her to keep her staff employed and her membership engaged.

“We’ll come out of this stronger on the other side,” she said.

Only a little uncertainty

Mark Guerringue is the publisher of The Conway Daily Sun and among the owners of The Laconia Daily Sun as well as The Berlin Daily Sun, which publishes twice a week.

All three papers are free, generating their revenue exclusively from advertising sales, and altogether profitable. He described the newspaper business as “an industry in decline, with lots of marginal properties” and anticipated ”a shock like this accelerates the trend.”

The migration of advertising, especially classified ads, Guerringue said, has steadily migrated from print to digital media, sapping the revenue of traditional newspapers.

”It’s tele this and tele that,” he said, suggesting that the pace of migration may quicken in a soft economy and “some of the advertisers won’t ever come back.”

At the same time, he said that from an editorial perspective, newspapers enjoyed more credibility than much of the digital media.

The Covid-19 crisis, Guerringue said, could further erode advertising revenue, as businesses trim advertising budgets to reduce operating costs, fail to pay their bills or turn to digital media. Newspapers, in turn, could find themselves choosing between a print medium with its known, if flagging, revenue stream and a digital platform where the advertising fees are relatively lower. “These are big decisions with big risks,” he said. 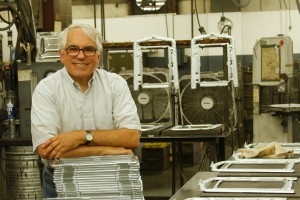 As for manufacturers, at Graphicast, a producer of precision metal components for original equipment manufacturers, Val Zanchuk’s highest priority is keeping his 25 highly skilled employees in sound health and on the job.

Zanchuk said the firm serves a ”niche in the product universe” by making precision parts in low volumes — “between 3,000 and 5,000 is our sweet spot” — for some 10 to 15 customers, and they are all manufacturers of medical equipment and appliances, for which Graphicast is the sole supplier.

He said that while one metal supplier had shut down “there are no problems with our supply chain and only a little bit of uncertainty.” produces high quality

Zanchuk said he reconfigured the shop floor to keep his employees eight to 10 feet apart.

“We’re following all the protocols,” he said. “We sent one elderly employee home, and we’re taking everyone’s temperature.”

The shop is currently operating four days a week, 10 hours a day, with a voluntary overtime program. “We want to ensure our people and their families stay healthy,” he said.

Shortly after Andrew White of Comptus Inc., a maker of environmental sensors and transmitters, was named New Hampshire’s Exporter of the Year by the U.S. Small Business Administration, Covid-19 set the world on its heels, knocking his plans for the year for a loop.

Speaking from his garage in Thornton, where the company operates, he said that the year began well as the first quarter’s financial performance topped the same period a year ago. But, with the appearance of the virus, sales flattened and supply chains were backlogged.

“China is a large market for us,” White said.

The firm’s products measure and transmit weather and climatic conditions — air temperature, barometric pressure, solar radiation, rainfall and wind speed — with a number of commercial and industrial applications. However White stressed that the company was exploring developing markets in countries where both fragile environments and economies are most vulnerable to extreme weather and climate change.

White said the company had planned to mount an expansive marketing initiative in 2020, highlighted by appearances at trade shows in Hong Kong, Canada, Central America, London, Nigeria and the Cook Islands, halfway between Hawaii and New Zealand in the South Pacific.

“We booked and paid for the travel,” White said, “and there are six to nine month delays. We’re at dead standstill for the time being.”

For the moment White is not alone.