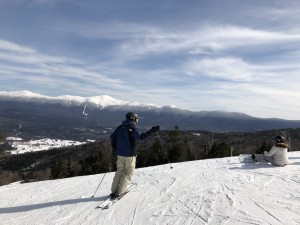 The state’s ski industry is facing its second major holiday period of the winter, again with rain in the forecast adding to the challenges posed by a pandemic.

But officials for the industry said they are managing to provide outdoor fun for many and have relied on snowmaking systems and cold nights to help keep the trails open.

This coming weekend is what has been considered in the past an important three-day weekend for the industry: Martin Luther King Jr. Day is Monday, Jan. 18.

Weather forecasts for the Conway area show rain for Friday night and Saturday with a bit of snow and ending as a rain event with temperatures in the 40 and 30s. Sunday forecasts are for clouds and Monday looks better.

Jessyca Keeler, president of Ski New Hampshire, the statewide organization that represents most alpine and cross country ski areas, said the bulk of the Christmas holiday guests came as they had reserved, but “didn’t really get rolling until Sunday the 27th as a result of the big Christmas Eve and Christmas day rainstorm that pretty much wiped out all of the natural snow that had fallen the prior week.”

However, she said, prior to Dec. 24, she was hearing that there were a lot of people out skiing, including during midweek periods.

“This was no doubt in large part a result of the snowstorm that dumped anywhere from 12 to 48 inches the prior week, as well as people wanting to enjoy the outdoors,” Keeler said.

With a lot of people working and studying from home, flexibility has allowed for more weekday visitors, ski areas have reported.

And the cold nights of recent weeks have helped add to trail counts and snowfall depths.

According to onthesnow.com, Wednesday’s base depths at the summits were highest at Bretton Woods, with 36 inches, followed by about two feet at Pat’s Peak in Henniker, King Pine in Madison and Cannon Mountain in Franconia Notch with about 26 inches.

But an all-day rain event Saturday could impact those base depths and reservations at ski areas, which are now required under COVID-19 protocols. It looks a bit like Christmas all over again.

“The rains definitely did a number on trail counts, but many ski areas were quickly able to get many of their trails back in shape for holiday skiers due to cold nighttime temperatures,” Keeler said.

Alpine areas have a definite advantage over cross country ski areas which do not have snowmaking systems for most of their trails.

Last year, the ski season ended early in March because of COVID-19 but prior to closing Ski NH’s 15 alpine ski areas recorded 1,961,072 visits, down significantly from the prior year which saw 2,142,668 visits.

According to a University of New Hampshire analysis, the state’s ski industry in 2011 was responsible for about $550 million in consumer activity, from lodging, retail and other purchases.

Keeler said it will be “tough to compare this year’s to last year’s (skier visits) due to the ticket sales limitations that most ski areas have implemented this year.  For the most part, there simply isn’t the same availability as there has been in years past, and so this will of course impact overall visitation data.”

Cross-country ski areas, which see perhaps 200,000 skier visits in a normal winter, had it tougher as a result of the rain, during Christmas, but a number of areas were promoting fat biking as an option for people to get outside and enjoy the trails, Keeler noted.

Retailers of hard goods say demand has been good, particularly for backcountry and cross country skis with people choosing the remote aspects of enjoying the snow to congregate settings at resorts.

Some have also decided to come to ski in New Hampshire rather than Vermont, which requires all out of state residents to have quarantined prior to coming to their slopes.

Keeler said there is definitely was a demand for the tickets that were available during the Christmas holiday period.

“I heard stories of resorts selling a set number of tickets for various days during the week, then releasing additional tickets which were snatched up quickly by eager skiers,” she said, noting that skiers and boarders should check again on the same day they want to ski to see if there is added availability if tickets are initially sold out.

The industry has been waging a media campaign to “Know Before You Go,” and listing the rules which require face masks be worn at resorts, visitors need to boot-up at their cars rather than storing their gear in the lodge and limiting the riding of lifts to those who are within the same family or group.

“For the most part I’m hearing that people are complying with the masking rules – although they sometimes need to be reminded of that – and overall things are going pretty well in that regard. I think now people just need to be aware that they can in fact go inside, there are options for food and beverages, but each resort has a different system for that so people should just be sure to do a little research in advance of heading to the ski area so that they know what to expect. This goes for tickets as well – just about all of the alpine areas are only selling tickets online, so it’s important for people to know this so that they don’t show up and end up disappointed that they can’t ski,” she said.