New Hampshire’s economy is still in good shape, but the labor shortage could be holding things back 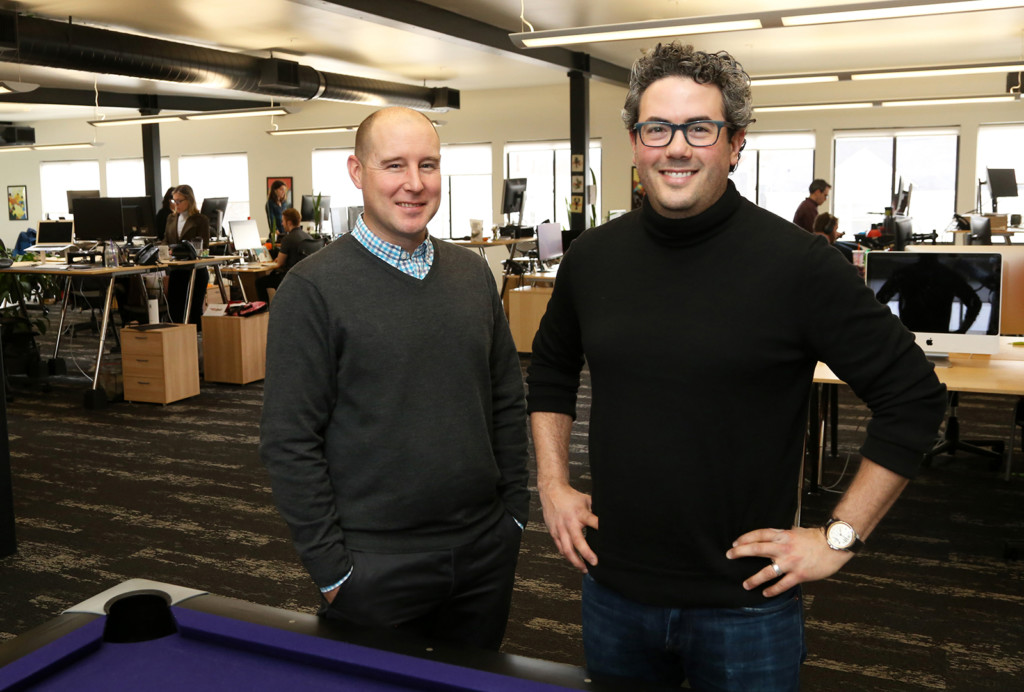 From left are Raka partners Brian DeKoning and Duncan Craig in their Portsmouth offices. (Photo by Allegra Boverman)

Raka, a digital marking firm in Portsmouth, offers its employees free local brews on tap, not to mention some hard cider.

The Great NH Restaurants chain last year bought condos to house its workers in Laconia. Now it wants to purchase an apartment building for them, not to mention offering them a signing bonus.

Liberty Hill Construction, a high-end Bedford remodeler, has had to turn away work because it lacks workers.

“We are literally not able to produce the stuff we can sell,” said Greg Rehm, Liberty’s owner. “We are being held back by the lack of a workforce.”

Years after recovery from the recession began, it’s still workers, not jobs, that the New Hampshire economy needs. Despite some concerns of a slowdown, particularly when it comes to manufacturing, the state’s economy is still “red hot,” said Tom Boucher, CEO of Great NH Restaurants, which is building yet another T-Bones in Concord and adding a new brand, Bull and Bear, in the old Shorty’s in Bedford, in addition to its CJ’s and Copper Door restaurants. “And I don’t see it slowing down anytime soon.”

“The economy still looks pretty good,” agreed Russ Thibeault, president of Applied Economic Research in Laconia. “There are some signs of softening going on nationally and in the state, but not alarmingly so. And there certainly isn’t any early signs of the big ‘R’ [recession] word.”

Manufacturing employment is off, even in New Hampshire, which has the fourth-lowest employment rate in the nation, at 2.6% in October, just shy of the 2.4% it was a year earlier.

The state gained 7,700 jobs in 2019, but it lost 900 manufacturing jobs. Manufacturing workers are making a dollar more compared to a year ago, but are working about an hour and a half less (though still averaging 42 hours a week), so their paychecks have taken a hit.

This reflects national trends. The manufacturing sector gained nearly 500,000 jobs in the first 30 months of the Trump presidency, but has lost 23,000 jobs since and the average hours worked was the lowest in eight years.

“The production side is a little soft,” said Thibeault. “The consumption side is holding the economy together.” 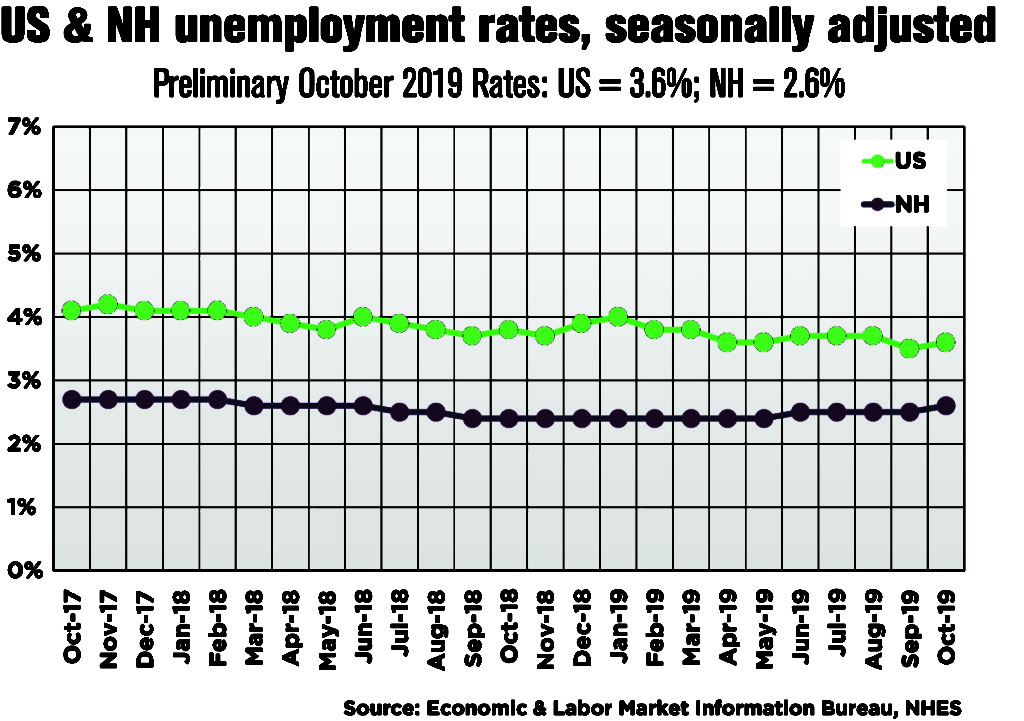 Many blame the trade war or, as Thibeault put it, the “uncertainties” of the trade war. Nationally, exports have dropped slightly (1.4% year-to-date as of October), but New Hampshire’s exports actually went up by 9%, the sixth-fastest growth rate in the nation.

It’s not that the Granite State is immune to tariffs. Trade with China has dropped by a quarter, relegating one of our formerly top three trading partners to No. 5. Trade with Mexico was also slightly off, but trade with Germany, New Hampshire’s No. 1 trading partner so far in 2019, was up by nearly half, and trade with Ireland — No. 3 behind Canada and ahead of Mexico — went up by nearly 30%.

You can thank the state’s aerospace industry for the big boost. Its products are now our leading commodity to export, up by 69% year to date, the same percentage it went up the previous year. In 2017, it more than doubled. The big export increase has been in civilian aircraft engines and parts.

The state has made a concerted effort to increase aerospace trade to help companies like XMA Corp. in Manchester, whose 32 employees make Omni Spectra telecommunication components for the aeronautics industry as well as cell towers and quantum computers. The company exports about a fifth of its products abroad and has a factory outside of Beijing.

“A year ago, it looked like it [the trade war] would be a major disruption to our business,” said Peter Richard, XMA’s director of finance and human resources. Instead of paying about a 5% tariff on some supplies, it faced the possibility of paying 30%, but it managed to dodge the tariff bullet by reclassifying its imports under a different code. The result: a 20% increase in sales.

Whether the trade war has been responsible for the dip in manufacturing employment is an open question, since it’s possible the workforce is shrinking slightly due to offshore production or automation. It also could be that the shortage of workers is holding things back.

“Workers are extremely hard to get,” said Richard, who is also president-elect of the Manchester Area Human Resources Association. “Sometimes it seems there is no one there.”

It’s not just the low unemployment, he said, but the state’s demographics.

“A lot of folks are approaching retirement. There is this silver tsunami, and manufacturing is skipped as a career for millennials.”

Some 15 years ago, they could have hired people for less than $10 an hour, he said.

“Now you can’t touch anyone for under $17 or $18, and we are still having trouble recruiting.”

XMA recruits all the time now, even if there isn’t an opening, so it will have people in the pipeline as soon as there is one, said Richard.

Once again, the healthcare sector saw the biggest job gain (2,300) from last year, but close behind are the construction trades (2,200). Workers left the trades during the last recession, but finally seem to be coming back as the economy does.

Thomas Roy is a pretty good example. His old firm, Kelly Construction Company in Manchester, closed in 2013, but he then went to work for Structure Tone, a national firm with an office in Boston. Three years later, he convinced his firm to open up a New Hampshire office. And after landing such clients as the university system, Dartmouth College and BAE Systems, its 14 staffers work on the entire first floor of a new building the company constructed in Salem, nearly tripling its space.

The commercial construction market has been doing great. The state’s 10-year moratorium on public school construction finally ended last year. Federal highway funding went up from $160 million to $220 million last year and is expected to climb to $250 million in 2020. The state budget also increased funding for municipalities that could be spent on local roads Sand other projects.

Housing construction? Not so much and it’s not nearly enough to meet the shortage of inventory.

Without new homes entering the market, housing inventory continues to shrink. There were 25% fewer homes for sale in November 2019 than November 2018. Year-to-date, new listings are off 4.3%. They go more quickly — in under 55 days, nearly a week less than last year — and at a higher price: $300,000 year to date, a 5% increase, and 98.3% of the asking price. But even with the booming economy, sales are down a percent. 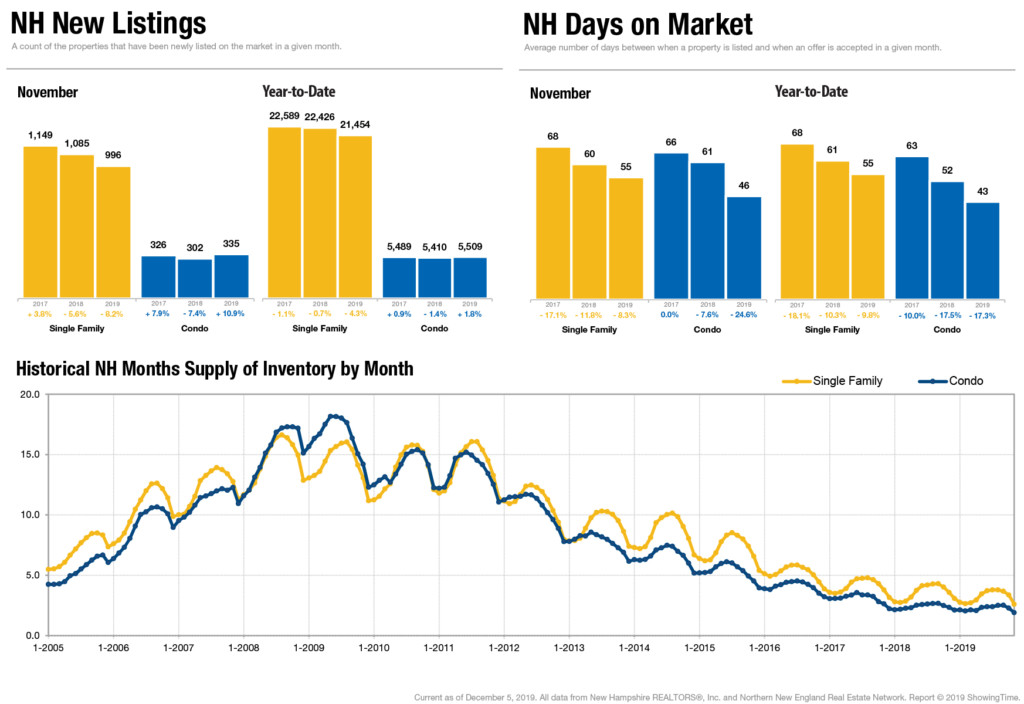 That’s not a great situation for Realtors, but remodelers are happy. “The inventory isn’t out there. They are not finding what they want, so they are building where they are,” said Rehm.

But that doesn’t open up any housing stock for first-time homebuyers. And the lack of affordable options among renters is even worse.

The number of jobs in the tourism sector actually fell slightly, though that may be because of difficulties in attracting workers. Rooms and meals tax collection is up as a whole, though it was down during the summer, the busiest season. Hotel occupancy is actually off by a few percent, though people are spending more per room, so revenue-wise, it is a wash.

Not many people are complaining. Boucher says his Laconia restaurant is going strong because of tourism.

“We had the best summer ever downtown,” said Michelle Galvin, owner of Pretty Little Things, a women’s clothing store in Portsmouth. “I think it mainly has to do with tourism. So many people are coming from Massachusetts and Connecticut to stay and go to a show and shop.”

Retail generally, however, is a mixed bag.

The number of retail jobs is up by 2,000, but most of them are in wholesale trade and warehousing. Only 300 of the new jobs are at brick-and-mortar stores.

This should be no surprise to those who are following the struggles of the national retail chains. Just last year such brands as Forever 21, Payless Shoes, the Gap, Victoria’s Secret, Sears and Abercrombie & Fitch all either went under or closed a lot of stores.

But Nancy Kyle, president of the NH Retailers Association, says that the retail apocalypse hype is overblown, pointing to an article that notes that for every store that closes, five are opening or that 16 major retailers were responsible for 73% of the store closings in 2019.

“Smaller retailers have the advantage over large ones in adopting quicker,” Kyle said.

And the ones that are doing well integrate online sales and social media marketing to make going there not only more convenient but “more of an event, an experience,” said Kyle.

Kyle points to the comeback of independent bookstores, which have managed to thrive, like Gibson’s in Concord and Toadstool Bookshops in Peterborough, Keene, and which just moved its Milford location to Nashua.

Actually, Toadstool’s revenues are off a bit, reports co-owner Willard Williams. This year, there isn’t the equivalent of last year’s Michelle Obama autobiography to boost sales.

Even so, Williams said, “the demand for books is still there.” The e-book craze has “leveled off a bit. I’m more confident that physical books are coming back.”

Of course, it is still too soon to know how retailers will fare in the shortened holiday shopping season. Indeed, it is hard to know which way the economy is going as well. Are we on a slight dip before resuming an upward trajectory, or have we reached a plateau and is this the beginning of a long descent?

“I think we are growing for now,” said Annette Nielsen, an economist for the state’s Economic Labor Market Information Bureau. “We are doing quite well, but there is too much uncertainty as to where things are going. It is too early to say.”