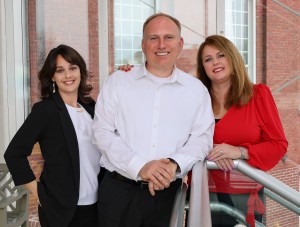 Chris Ware, center, is the NH Association of Realtors’ 2022 Realtor of the Year. He co-owns and runs the Ware Group in Bedford, in conjunction with Keller Williams Realty Metropolitan, with his wife Lynne, right. Bonnie Morris, left, was added to the group recently to further their reach into the Monadnock Region. (Courtesy photo)

Soon after the Great Recession of 2008, Chris Ware’s professional life felt like being on a hamster wheel – he was working hard and fast, but getting nowhere.

He was in corporate technology at the time. There had been layoffs. He was looking at a future of capped salaries, working more for less. It was like the movie “Groundhog Day,” he recalls, “I was kind of just going through the motions day to day.”

Fast-forward to this year and Ware is the NH Association of Realtors 2022 Realtor of the Year.

From spinning his wheels to this achievement after a mere seven years as a Realtor, Ware credits his wife and now business partner Lynne. “She had a lot of faith in me to make a career change,” says Ware. Going to work for himself, he told her, was risky. “But she had faith in me, so I did it.”

He was unsure, at first, that real estate would stick.

“It took a couple of years before I knew it was my career,” he says. “I went through this transition where I was like: I’ll just dabble in this until I can figure out where I land next.”

It was when he became a director with the Greater Manchester/Nashua Board of Realtors that he realized the potential impact his work in the industry could have.

“I realized: Wow, I have 2,000 members that are counting on me to represent them. They have faith in me,” he says. “I think that’s when I had that aha moment.”

Ware, a 1996 graduate with a business degree from Northeastern University who also has an MBA from the University of New Hampshire-Manchester, worked first as a stockbroker for a couple of years, then held a variety of business analyst and program management posts at Liberty Mutual and Fidelity Investments, making the transition to real estate with his license in September 2015.

His Ware Group realty office at 168 S. River Rd. in Bedford is part of Keller Williams Realty Metropolitan. Lynne came on board as a Realtor six years ago, and they recently added Bonnie Morris to further their reach into the Monadnock Region.

“Chris represents Realtors perfectly with his commitment to professionalism and his dedication to helping New Hampshire residents buy and sell homes,” said Adam Gaudet, 2022 president of the NHAR and owner/broker of 603 Birch Realty in Concord.

It’s not sales that make a Realtor of the Year, according to Ware, but the willingness to take on responsibilities and leadership roles to further the community and the industry.

Outside of real estate, he’s very involved in the Rotary Club of Bedford, serving as its president in 2020-21. He’s been a basketball, baseball and soccer coach. He’s a member of the Greater Manchester Chamber of Commerce.

He was vice president in 2020 and president in 2021 of the Greater Manchester/Nashua Board of Realtors and is active in the statewide association and hopes to become enrolled in the NHAR’s leadership development program next year.

“I definitely have ambition to move into leadership in NHAR,” he says.

The worst of the Covid-19 pandemic years – 2020 and 2021 –presented a challenge to several sectors of the economy. Ware, like many, was surprised that the real estate sector boomed during that period, a time when the highly contagious nature of the Covid virus made person-to-person transactions extremely difficult.

“When everything kind of hit the fan in March 2020 our business went quiet,” he says. “For two months my phone didn’t ring. All the listings we had, they pulled the listings. I had no buyers going out.”

“After two months, it was crazy. It was gangbusters for the rest of the year,” he says. “All of a sudden, it seemed like everyone was coming to New Hampshire. All of a sudden, people are like: ‘Hey, I need to own something where I can be safe, have a little bit of space, and be out again.’”

The shut-in nature of the pandemic forced a reliance on technology, and Ware used his knowledge of it to create online opportunities to help the Greater Manchester/Nashua board raise some money through fundraisers for its charities, figured out how to hold board meetings virtually through Zoom, and how to train members online. He made similar efforts on behalf of his Rotary Club.

That knowledge continues to help him build his business today, as he and wife Lynne, who has a background in quality assurance, adopted a customer relationship management (CRM) system for their business that helps manage communications with both sales leads and clients.

Business was good, especially for sellers, during the pandemic. Property in the Granite State became very desirable. That put a squeeze on inventory that was already a little thin. With so much demand, asking prices went up and up and up. Realtors found themselves with all-cash offers, in many cases many thousands of dollars above asking price, and with no contingencies, no home inspection. Median prices for homes and condominiums reached record highs.

Those record prices underscored the other vulnerability in the New Hampshire economy – the lack of affordable workforce housing.

Prices are beginning to ease, according to Ware. He is seeing sellers now repricing down from their asking price. But while prices might be moderating, home affordability is still expensive because of rising mortgage rates. “A lot has to do with interest rates,” says Ware. “We just have some buyers that can’t afford what they could previously. They’re again priced out of the market, which is unfortunate.”

State policy – and those who make it – should stay focused on creating ways to create more workforce housing, he says.

“I really do hope that the governor stays focused on putting money into affordable housing because we need it desperately in New Hampshire,” says Ware. “We have to be able to offer houses to the police and to the fire and to teachers to keep them in our community. This is really important for Realtors to be stewards of this, we really have to go out and educate our zoning boards.”

There should be more creativity in communities that have density requirements too prohibitive for clustering workforce houses. “Some people would be very, very happy with a 1200-square-foot ranch and a quarter-acre,” he says. “Why does that only have to be in Manchester? Why can’t it be in Hollis or Bedford?”

He appreciates the fact that workforce housing is an important action item for the NHAR. The association, in conjunction with the Center for Ethics in Society at St. Anselm College, held a roundtable discussion in May about the role the real estate professions might play in solving the affordable housing crisis.

“It’s really something that I’m looking to focus on in the coming years,” he says. “That’s going to be my next way to give back.”