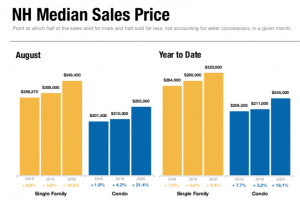 The median single-family home price in New Hampshire jumped nearly 15%, rising to nearly $350,000 in August, according to the latest report from the New Hampshire Association of Realtors.

Driven by the continued shortage of inventory, those who put their homes on the market are getting what they ask for and a bit more.

The actual number of homes sold was down, though only by 1.4% compared to last August. That’s because there were 2,383 homes for sale in August, nearly 58% less than last year. Indeed, there was only about a month and a half of inventory for sale last month. Last year, it was nearly four months.