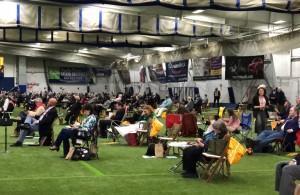 Members of the New Hampshire House met Wednesday at the NH Sportsplex in Bedford. (InDepthNH photo)

The New Hampshire House of Representatives passed a budget on Wednesday that might be a dream for businesses financially, at least when it comes to taxes, but a nightmare politically because it includes several provisions that might prevent it from crossing the finish line, despite being passed on a 205-178 party-line vote.

There are some other business tax changes as well.  It allows a credit for tax overpayments of up to five times the tax liability over five years. It also increases filing thresholds for the BET to $250,000 for combined gross receipts and the enterprise tax base, which constitutes wages, interest and dividends. It is currently $200,000 for the receipts and $100,000 for the enterprise value.

Small businesses may be particularly looking forward to the tax cuts, since previous cuts in the BPT were more front-loaded.

The budget would also eliminate “guardrails” in current law, which keeps tax rates constant unless revenue goes up or down 6%.    That question is moot for the time being, however, since revenue from all state taxes, save the rooms and meals tax, unexpectedly rose substantially during the pandemic. And about $1 billion in federal funding is coming in as part of the American Rescue Plan, though it’s still not clear whether the money will go into the general fund or spent separately by the governor’s office.

Speaking of the rooms and meals tax, the budget would cut that rate from 9% 8.5% starting in January.

The budget cuts the 5% interest and dividends tax by one percent a year, starting in 2023 and eliminating it by 2027, so that really doesn’t affect this budget much.

On the other hand, the budget makes it a bit easier to increase unemployment taxes. Taxes will go up when the unemployment compensation fund falls below $400,000 – rather than $300,000 – and go up again when it fails to reach $350,000 instead of $250,000, though it takes away the emergency power of the unemployment security commissioner add a surcharge.  That won’t affect the general fund, however.

To make up some of the lost revenue to the general fund?  Expanded gambling.  The budget would legalize gambling on historical racing via slot machine-type devices, at charitable gaming casinos.

Critics say it’s a clever way to sneak slot machines into the state, without the local opt in-necessary for gambling games like keno, and more recently sports betting. But opponents say historical racing is not the same as traditional slot machines, and they would only be allowed in licensed venues.

The revenue gain is relatively minor, less than $13 million. The House has traditionally opposed expanded gambling, but that may be changing, as the 223-152 division vote on a standalone bill on the matter right before the budget indicates.

The House’s main way to cut taxes is budget cuts. The budget slashes 1.4% from the present budget. It suspends aid to municipalities. Critics say that could increase property taxes, which businesses pay as much of as businesses taxes, but defenders note that towns too are getting hundreds of millions more from the federal government. It asks that the Department of Health and Human Services find ways to cut $50 million from its budget and leaves vacant hundreds of positions. It also cuts funding for an adequate education by about $90 million, cuts the highway fund by $5 million all infrastructure that business indirectly depend on.

It even cuts some programs that businesses directly depend on.

While the budget restored funding for the New Hampshire Small Business Development Center, which had been zeroed out in the governor’s original proposal. The SBDC funding, though come from a $400,000-a-year cut in Division of Travel and Tourism Development’s budget, right when the state was hoping for tourism to revive the ailing hospitality industry. It also suspends the law that gives the DTTD a percentage of the rooms and meals tax.

But Department of Business and Economic Affairs Commissioner Taylor Caswell expressed confidence that the Senate will restore that funding to the division.

There were other changes as well. The budget gives $10 million to the victims of the FRM scandal, reimbursing investors in the state’s biggest Ponzi scheme who lost their life savings before the firm’s collapse 2009, partly due to the state’s faulty oversight. (Democrats contrasted that funding to the budget cuts in human services.) It also blurs the line a bit between the state Public Utilities Commission and a new Department of Energy, which would share some functions. Some business organizations want to bring the PUC more under legislative control.

But what may be the biggest concern is the non-budget add-ons in the trailer bill. House Bill 2 is supposed to make changes in the law to support the budget, but there’s concern the add-ons might threaten the budget – and their tax cuts – as a whole.

One provision would require health clinics to maintain a physical and financial separation between abortion and other services to receive state funding. It also contains a provision prohibits teaching about systemic racisms and sexism in public schools as well as by organizations and businesses that receive state funding. The House proposal also would also limit the governor’s emergency powers. All of the provisions could put the budget at risk of a gubernatorial veto if it passes the Senate.